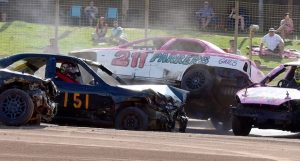 THE “Cherished Whispers” charity raised vital funds during the Banger race day at Arena Essex on Sunday. The charity provides support and memory boxes to the Medway Maritime Hospital for parents who have suffered the loss of a baby in pregnancy, birth or shortly afterwards. Several raced in memory of Lilly-Mae Garrett, who sadly passed away shortly after birth in March of this year, including Lilly-Mae’s father – Darren and friends and family.

With a packed entry, two separate heats were called for and the first saw a fairly quiet start to the day although Daryl Richardson was fired into the turn one wall by Alfie Crittenden. Billy Standing pushed T-Jay Powers out of the lead on the last corner to take a dramatic win. Tom Greenstreet won a livelier second heat , several big crashes punctuating the race, the biggest being Ryan Taylor’s clash with Harry Barwell, Taylor later being collected hard by Mark Barnes.

Louis Parker was ironically spun into father Darren at the start of the consolation race, subsequently rolling over as the pack thundered in. At the restart Charlie Neale invited Alfie Lee to try to finish off his borrowed Nissan Micra and Lee obliged – crashing him on three successive laps, but Neale certainly wasn’t finished for the day. Jake Sheldon motored to the win.

The final saw the mother and father of all pile ups on the back straight, triggered by Darren Parker spinning Charlie Jackson. With such a big grid of cars this spelt disaster with car after car piling in – the biggest impacts coming when Billy Crittenden destroyed Ronnie Hunt, Crittenden then getting a double impact from Harry Barwell and Jake Sheldon before Danny Mitchell was thundered into Sheldon by Charlie Barwell. With many wrecked cars, the restart was a quieter affair with Tom Greenstreet taking his second win of the day ahead of Shane Sandy – who also received the smart car award.

There was a dramatic finish to the allcomers race at the end of the day when the leader, Joe Powers, was fired into the armco by Tom Greenstreet. In the confusion, Billy Standing overtook Greenstreet in the final yards for the win. The Destruction Derby saw Charlie Neale take a huge amount of damage in his Micra and he was certainly the crowds favourite as the entry was gradually whittled down. Ultimately though, George Dixon finished off Danny Mitchell and Sean Cooper to take the last car running award.

After receiving damage in the first lap of the first Stock Rod race of the day, Corringham’s Danny Wade turned his luck around when he found himself with a commanding lead in the final. He was narrowly fending off Jody Hawkins for the lead when Hawkins suddenly lost power and with the rest of the pack so close behind it was only a miracle that everyone survived the resultant moment intact. Despite David Crouch chasing him down, Wade was comfortably the winner.

Nigel Carroll proved that patience has his rewards with a great heat and final double. He played the waiting game in the final and sensed that the other heat winner, James Heard, was a little erratic in his pursuit of leader, Kieron Thomas and sure enough a rather rash dive saw Thomas spinning and Heard disqualified as Carroll duly raced to victory. Thomas put the disappointment behind him to win the allcomers race at the end of the day.

The next action at Arena Essex is on 10th September when the PRI Bangers, Lightning Rods, Stock Rods and Stock Cars all return to track. Start time 1pm.