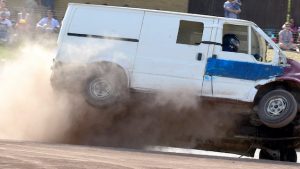 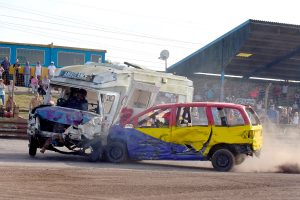 THE Destruction Derby was certainly the highlight of the annual Big Van Banger racing at Arena Essex on Bank Holiday Monday.

With a relatively low entry of Vans, the people carrier of Karl Douglas was allowed entry and despite being dwarfed by those around it, it proved very rapid and won most of the races during the afternoon, despite starting with a half lap handicap. Luke Cornish did manage to beat Douglas to the flag in one event, in his rather more traditional Transit Van.

But it was the Destruction Derby that most of the big crowd had come to see and it did not disappoint. Douglas was clearly a target and took a hit from the bus of Peter Bowley and then Dom Hall weighed in with a hit that left Hall teetering on two wheels for a few seconds, the second time during the afternoon that Hall had looked in imminent danger of rolling over – a high speed trip across the kerbs causing the other ‘moment’.

Jason Jackson and Bradley Lee met in a head on whilst Cornish drove through the side of Bowley. Cornish then lined up a hit on the ambulance of Alfie Lee but Bowley crashed him out before he got there. Lee’s ambulance then got on two wheels after a big hit on Bowley, before he took an enormous smash in the side from Douglas.

Bowley was the only one moving at any significant speed at this point but he sportingly pushed Cornish off the kerb and allowed Cornish a big smash to the rear of his bus, with both Douglas and Bradley Lee then joining in with what little they had left to offer. Bradley Lee took the victory with Peter Bowley getting the best entertainer award.

A dramatic finish to the Ninja Sprint Southern Championship saw the two leaders crash as they approached the line. The unfortunate Toby Parfitt turned sharp right into the fence, whilst Harry Fryatt managed to bounce over the line almost simultaneously with Billy Sandford, Toby Partridge and Robbie Armit.

Sandford got the verdict, having gone from third to first in the final yards, with Partridge, Fryatt and Armit next up. There was concern for Parfitt with the youngster taken to hospital, later diagnosed with a lacerated liver.

Three straightforward Mini Stox races saw David Shearing dominate. The Suffolk racer was always a comfortable distance ahead of the rest. Harry Overy picked up a couple of second place finishes whilst the third spot on the podium generally went to Aaron Totham, although the final saw a bit of variety with Totham second and Abbie McGuiness fending off Harry Overy on the last corner.

An explosive start to the first heat for the Stock Cars spelt the end of the day for Grays Steven Donovan, who was the victim of a wholesale jump start from the star graders. With the top drivers battering each other senseless, Dan Guidotti raced to victory. The star graders redressed the balance later in the meeting though, Steve Davies winning heat two and Nathan Roberts the final.

The next action at Arena Essex is on 10th September when the PRI Bangers, Stock Cars, Lightning Rods and Stock Rods are all back in action. Start time 1pm.
Captions: