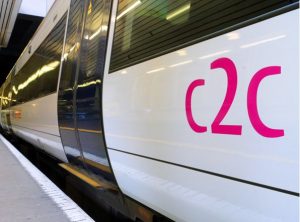 LOCAL train operator c2c has reclaimed its position as the most punctual and reliable commuter service in London according to new statistics published by Network Rail.

In the four weeks to 19 August, 96.3% of all c2c services arrived on time. This was the best performance among train operators in London and the South East, and compares to the national average of 90.1% punctuality.

This is the second time c2c has landed top spot among London’s commuter operators since the operation was taken over by Italian rail giants Trenitalia in February.

c2c Managing Director Julian Drury said: “We know our customers expect a punctual and reliable service from c2c, and we’re pleased to have regained our crown as the best-performing commuter service in the South East. We will continue to do our best to run every service on time, while delivering this year’s £40m package of other passenger improvements like new trains, better customer information and free WiFi onboard our trains.”

Today’s figures by Network Rail are the Public Performance Measure, which is the official rail industry measure of punctuality used by the Government. Full details are available at www.networkrail.co.uk/who-we-are/how-we-work/performance/public-performance-measure/.