By Staff Reporter on September 4, 20175 Comments 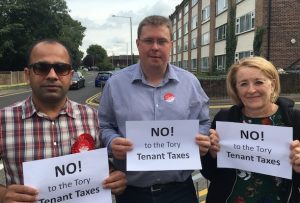 AS summer draws to a close, many residents have found themselves surprised by the new “Tenant Top-Up Taxes” introduced by the Tory-controlled Thurrock Council.

There are new charges for lift maintenance, door entry systems communal heating and lighting, and grounds maintenance. The total extra payable could be nearly £400 per year for some residents, despite no new services being delivered.

Thurrock Labour have consistently campaigned against the increases, brought a petition to council and voted against the council’s Housing budget in February. However, in July the Tory cabinet agreed to push ahead with the charges despite outcry from opposition groups and overwhelming opposition to the idea from council tenants.

This weekend, Thurrock Labour teams were knocking on doors and talking to residents about the changes.

“We have opposed these plans continually over the last year. The Tories are punishing the council’s tenants because of Tory cuts in council funding. I want to be really clear on this – these charges would not have been introduced under a Labour administration. Sadly, the Tories took their first opportunity to bring them in, and now residents are seeing the difference between a Conservative council and a Labour council.

“I am calling on the administration once again to scrap these charges. The Tories need to listen to council tenants. Thurrock Labour will continue our campaign against these Tenant Taxes and for a fairer Thurrock.”