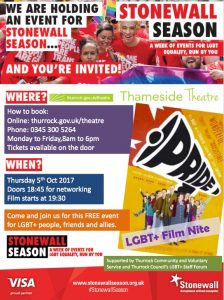 MEMBERS of Thurrock’s LGBT+ community are holding an event for Stonewall Season – a week of events for LGBT equality and you’re invited!

Kristina Jackson, CEO at Thurrock CVS said, ‘we are very proud to support this community event for LGBT+ Thurrock residents, friends and allies. This is a positive step in establishing more social occasions and creating networking and support opportunities.’

All LGBT+ people, friends and allies come and join us for this FREE screening of brilliant British film, “PRIDE,” inspired by an extraordinary true story.

It’s the summer of 1984, Margaret Thatcher is in power and the National Union of Mineworkers is on strike, prompting a London-based group of gay and lesbian activists to raise money to support the strikers’ families. Initially rebuffed by the Union, the group identifies a tiny mining village in Wales and sets off to make their donation in person. As the strike drags on, the two groups discover that standing together makes for the strongest union of all.

It’s a great opportunity to socialise, network and make new friends and enjoy a thoroughly terrific evening of entertainment.

Doors open at 18:45 for networking