THE Red Ensign flag has been raised outside Civic Offices to mark this year’s Merchant Navy Day. 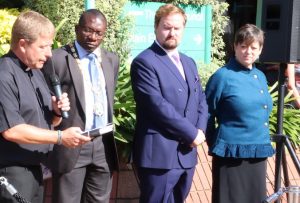 At a ceremony held on Friday 1 September, the Mayor was joined by veterans of the Merchant Navy, fellow councillors and Thurrock MP, Jackie Doyle-Price.

Reverend Daren Barlow welcomed attendees and opened the event with a prayer.

Merchant Navy Day is organised by Seafarers UK, who campaign on behalf of maritime communities and provide support to seafarers and their families.

Mayor of Thurrock, Cllr Tunde Ojetola, spoke after the service: “It is important to recognise the tremendous sacrifice of the brave men and women of the Merchant Navy on behalf of Thurrock and the nation.

“We owe a huge debt of gratitude to those who served and lost their lives, as well as all those currently serving and protecting our interests at home and abroad.”

The Mayor read aloud a message from HRH The Earl of Wessex during the ceremony: “On this Merchant Navy Day, I very much hope you will support this campaign by Seafarers UK to remember the sacrifices, salute the courage and support the future of the often unsung personnel of our Merchant Navy.

“Too often they are the forgotten or invisible service, by raising the Red Ensign you will ensure that at least on this day they are remembered. Your act will mean so much to their families and to the retired, but most especially to those at sea.”