THE cast of the Thameside Theatre pantomime Beauty and the Beast made their debut appearance at the Orsett Show on Saturday 2 September promoting this year’s festive treat. 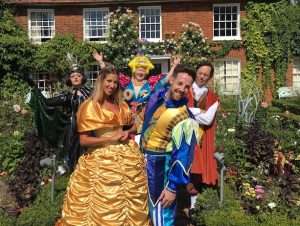 Following a photo shoot at Barnards Farm, young people were treated to goodie bags and able to meet their favourite characters for this year’s spellbinding pantomime. Thurrock Council sponsored the Orsett Show’s main stage and the Thameside Young Producers organised the programme of performers including the Orsett Show’s Got Talent competition with prizes provided by intu Lakeside.

Leading the cast will be X Factor and Celebrity Big Brother star Stevi Ritchie who will play French Franc. Stevi is very excited to be performing at the Thameside Theatre this Christmas. The production is running in association with Polka Dot Pantomimes, whose production of Peter Pan last year was a massive hit, beating previous box office records at the Thameside Theatre.

Joining the cast and back by popular demand is Grays’ very own Luke Coldham who played Smee in last year’s Peter Pan, and this year will return as Dame Dolly Doughnut which audiences will love!

Beauty and the Beast is running from Friday 1 December 2017 to Sunday 7 January 2018 including a relaxed performance for people with an autism spectrum condition, learning disabilities or dementia and their families, taking place on Monday 18 December, 6.30pm

The Thameside Theatre is Thurrock’s great little theatre which will host this big production that will have you singing and laughing along to this great story.