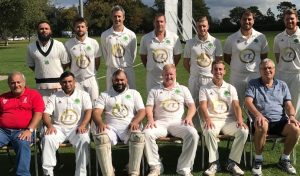 Orsett & Thurrock CC 1st team had a poor finish to what was a fantastic season on Saturday at School Lane. Needing a win for promotion with a chance of winning the league, O&T lost the toss and were asked to bowl first. Harold Wood got off to a strong start but some fantastic bowling by Shahid Khan (6-54 from 16 overs) never let the score get away with the away side finishing with a par 195-9 from their 50 overs.

In reply, Harold Wood bowled superbly with the new ball reducing O&T to 45-4. Overseas star Nawaz Ahmed Jan started to rebuild, and when joined by Kirk Laws at 94-6 O&T began to pull themselves back into contention. A partnership of 60 was ended when Ahmed Jan was trapped LBW for 75. After some late contributions from Matt Hills and Joe Mitchell, O&T were unable to reach the target falling 9 runs short of victory meaning they finish the season in 3rd place in Divison 1, a place short of promotion to the Premier division.

Overall it has been a fantastic season for Orsett & Thurrock 1st team. Special mention goes to Shahid Khan who finishes the season with 44 wickets to top the league standings and Mark Pavitt who scored 507 runs at an average of 50.70.