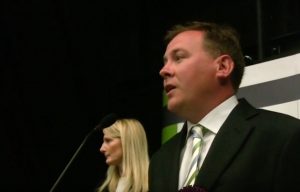 UKIP Thurrock are claiming that “The truth about Cllr Gledhill’s Grass Tax was withheld at every stage of the council’s scrutiny process”.

A UKIP spokesperson said: “At two committees and two cabinets the Tories insisted that these charges would only apply to:

‘…. services for specific groups of dwellings – high, medium and low-rise flats and other dwellings with communal facilities.’

They added: “At no point was there any suggestion that council tenants living in terraced, semi-detached and detached housing would be facing charges for having grass verges cut or the maintenance of alleyways they have no direct access to.

“The Tories must have known the justifiable outrage that this underhand tax would generate. This may be why they prevented any investigation of the exact charging scheme at the committee stage. Each of the reports to the December and February Committees and February Cabinet contained the following line:

‘Work is still ongoing with regard to establishing who should be paying Grounds Maintenance and how much income the interim charge in 2017/18 would generate.’

UKIP Housing Spokesman, Cllr Luke Spillman said: “It seems clear that the Tories have done everything they can to prevent the true nature of these charges coming to light until the last possible moment. This is an awful abuse of the committee scrutiny and public consultation process and cannot be allowed to go unchallenged.

“I implore Cllr Gledhill to reconsider the implementation of these charges without them first being subject to a proper and informed scrutiny and consultation. The Tories have been keen to use the line ‘sunlight is the best disinfectant’ claiming that they are running an open and accountable administration. An approach in stark contrast to this underhand grass tax. A tax that has been designed, planned and implemented from the shadows.”