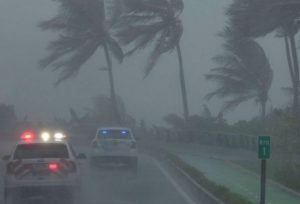 SEVEN Essex Police officers have travelled to the Caribbean to help with the recovery following Hurricane Irma.

The officers, led by Superintendent Andy Mariner, are among 53 from 14 forces to be providing support following Irma.

They flew out of RAF Brize Norton yesterday (Sunday, September 10) in co-operation with the Ministry of Defence.

Their role will be to support the local force maintain law, order and policing services.

They may also be helping to locate missing people, liaising with UK authorities and assisting with family liaison.

The team will be in the Caribbean for two weeks.

Before he left, Supt Mariner said: “All of us have seen the footage on the news of the hurricane and the utter devastation it’s left behind and wanted to help.

“When the opportunity came to help out it was something we felt we had to do.

“We’re lucky enough to be in a position where we can go and hopefully make a bit of a difference.

“Policing is about helping people, often when they’re most in need and at their most vulnerable, and this situation is no different.

“I think we’re all nervously anticipating what it’s going to look like when we get there but optimistic about what we can do to help.”

“When the call came in for help, they didn’t hesitate to volunteer despite the impact being away will have on their families.

“At least two of the officers will be missing their children’s birthdays as well as other family events.

“I think this attitude and dedication to putting other people first, especially those in real need, exemplifies what is great about our officers.

“I wish them the best of luck and know their expertise and knowledge will be invaluable in supporting the local force.”