Fire in derelict buildings spreads to Sainsbury’s in Chafford Hundred.

The fire is now out. The incident has been scaled down, two fire engines will remain on site dampening down remian hotspots.

The fire is surrounded. Firefighters are using multiple hoses and a hose from an aerial ladder platform to extinguish the fire as quickly as possible and to stop it spreading.

Police are assisting the fire service at the scene of a fire in a derelict building in Howard Road, Chafford Hundred.

Drivers are asked to avoid the area and are thanked for their patience.

Police and the fire service will carry out a joint investigation to establish the cause of the fire.

Fire in derelict building and supermarket

Firefighters have been called to a fire in a large derelict building which has spread to a neighbouring supermarket.

*This incident is on-going. More details will be added shortly*.

WE have received a report of a fire in or near to the Chafford Hundred area.

Unconfirmed reports that the undeveloped buildings at the back of Bannatynes are alight.

Sainsbury’s has been evacuated as there are concerns regarding the fire spreading. 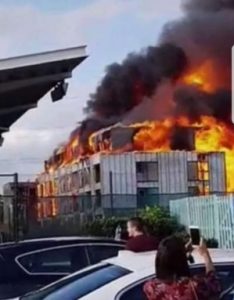 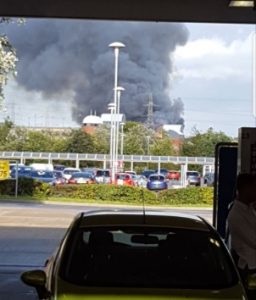 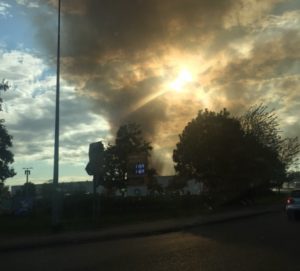 Burghley Road, the road that has Sainsbury’s on right and goes down to Lakeside is closed.

Traffic building up on A126 at Lakeside.

YT has contacted both Essex Fire Service and Essex Police.

Last year, we filmed a news item from the front of the developments.