Tilbury Bounce Back With Derby Win 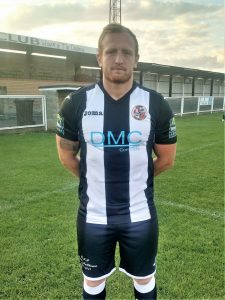 Tilbury bounced back from Saturday’s 6-1 humiliation at Bury Town to win the Bostik North local derby at Parkside on Monday evening.

Tilbury made changes following Saturday’s game, with Tony Martin and Danny Smith receiving there first starts of the season. Tony Martin who was playing his 100th game for the club, served up a fantastic goal inside the opening quarter to notch up his 40th goal for the club.

The game started with both sides trying to play football on a zippy suffice due to the rain.

The opening goal came after 15 minutes and it was a memorable one as Tony Martin found the top corner from 30 yards, giving Madden no chance.
Jamie Age had an opportunity to equalise five minutes later but put his effort over the bar.
At the other end Aveley were grateful to skipper Jack Barry for a goal-saving tackle on Toby Aromolaran as he ran through after a number of great runs. Right on half time Aromolaran was again in the action as he ran the length of the pitch only to see his effort go just wide.

The second half also started well for Aveley, with a half chance falling to former Docker Jack West, who put his effort wide, before Tilbury defender Joe Turpin almost put through his own net but the ball was saved on the line by Clarke Bogard.

A number of substitutions took place as both sides tried to change the game, but the decisive moment came on 82 minutes when Tilbury’s Adam Vyse ran through and fired his side’s second into the bottom corner.
Aveley tried hard to get back into the game and pressed right to the end of 8 minutes added on. The final kick fell to Abdul Salami whose header was saved after a ball from Lewis Jaggs.

After the game assistant Manager Danny Smith said “The players showed great character to pick themselves up from Saturdays disappointing defeat at Bury, to beat a very tough Aveley side.

Tilbury are back in action on Saturday when they welcome basement side Norwich United.