BACK in May I saw the competition launched by the Scout Association to go ‘Into the Wild’ with Steve Backshall and Helen Glover – 20 Scouts and Explorers given the opportunity to spend 24 hours in the wild in the Lake District with them both. I completed the application form and sent it off – not giving it a second thought that I would be chosen – but I was!

We had to make our own travel arrangements to get to Great Tower Scout site in the Lake District so our family travelled up on Saturday and stayed in a caravan in Newby Bridge about 15 minutes from the site. 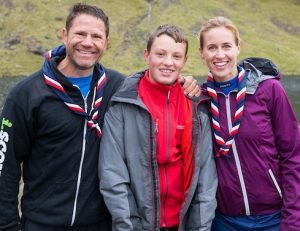 On Monday morning I woke to rain! By the time we drove to the campsite the rain had eased and I joined all the other lucky winners in the barn where we chatted until Steve and Helen arrived. First things first our kit was checked to make sure we had what we needed – or anything we shouldn’t!
Steve explained to us what would happen and that we would be split into team Helen and Team Steve for the day – I got team Helen which turned out to be the best at every activity we did!

After lunch we did bases on First Aid, knife skills, fire lighting and shelter building, just to make sure we were prepared for the night ahead. We were then taken down to Lake Windermere where we had to row across in two bell boats to where we would build our shelter. Of course our team made it about half an hour before the others but then we did have an Olympic rower on board!

After hiking for about an hour we found our site where we were to build our shelter. All we were given was a small tarpaulin which our team decided we would use to cover our rucksacks to keep our spare clothing dry as the rain was getting harder and harder! Once we had built our shelter and gathered some firewood we had to get our fire light – which was tough as everything was soooo wet but we managed it in the end – with the help of some toilet roll! Once the fire was burning we were shown how to skin a rabbit – and were then given 2 more to do, our tea, Rabbit stew! It wasn’t the best dinner ever but it was wet and warm! It was then time to bed down for the night – by then we were really really wet and cold and some chose to stay around the fire to keep warm. Those of us that slept in the shelter – well laid down in our sleeping bags anyway struggled to keep warm in the soggy wet mud, this wasn’t fun especially as Steve and Helen were cosily tucked up in their tent!

After a very soggy night we were woken bright and early and had to pack away ready for the day ahead. Breakfast was in a bag and not the best camp breakfast I have ever had! Once we were packed up and given our lunch to pack in our rucksacks we were taken by minibus to the foot of the Old Man of Coniston. As we climbed we chatted with Steve and Helen and they again shared stories with us all. The views were amazing as we reached the summit – wow! We began our descent and about half way down stopped for lunch and photos.

We eventually returned to Great Tower campsite at about 2.30pm and were greeted by cheers and clapping from all of the parents and staff who had been waiting for us for an hour. We were all very tired but had had a brilliant time despite the weather! Steve presented us all with a certificate and signed our neckerchiefs as a momento of our trip. He told us how proud he was of us all and what we had achieved over the 24 hours. What a fantastic opportunity I was given – not many can say they have spent 24 hours in the wild with Steve Backshall and Helen Glover – I can!