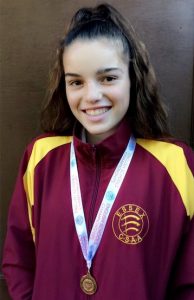 THREE Thurrock Harrier athletes wore their Essex vests with pride this weekend (16th /17th) when they competed in The English Schools’ Combined Events Championships held in Boston, Lincolnshire against some of the best young athletes in the country and the worst weather conditions of an outdoor athletic competition.

Individually Ruby Bridger, of Hathaway Academy, gained a bronze medal with her pentathalon pb score of 3180 which is also a new club record, She also PB in High Jump with 1.59cm.

She is now ranked 3rd in England. Ruby earned her England vest and will now go on to represent England in Glasgow in November.

Ruby along with Sola Taiwo (William Edwards) both in the Junior Girls team helped Essex come second in their competition. Ruby and Sola currently sit 1st and 6th in the East region.

Theo Adesina, William Edwards, was a strong member of the team in the Intermediate Boys Octathlon category which saw Essex come second. Individually Theo, came 8th with a PB score of 4703, also gaining a 35.56 pb in javelin. This is a great achievement for him in his first year in this category. Theo is 2nd in the East region.

It was a successful weekend for all. Their coach, school, parents, and indeed all at the club are very proud of their achievements.