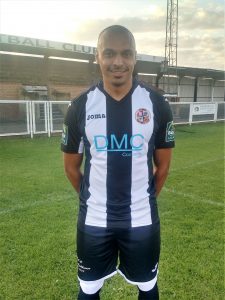 Emiel Aiken – One of Tilbury’s scorers in Saturday’s goal fest.

Tilbury made it three league games undefeated after a ten goal thriller at Mildenhall Town on Saturday, with game having nine separate scorers with a number of the goals being of a high quality.

Tilbury started the game in red hot form and took just four minutes to go in front. Louis Hawes played a long ball to Adam Vyse whose left foot effort was well saved by Sam Roach, but Toby Aromolaran was on hand to hit home. Aromolaran who was in the thick of the action saw his low effort on 16 minutes brilliantly saved by Roach. With the game one way traffic and Tilbury creating chances, it looked like there would be more goals and this duly happened on 34 minutes when a cross was not cleared and Mildenhall’s Josh Curry hit home.

Within two minutes Tilbury were again in front when Armolaran ran down the right, cut inside, before the ball was deflected back to Bryan Kyungu who from the edge of the area volleyed  in to the roof of the net for the goal of the game. On 38 minutes  a Ryan Melaugh free kick from 35 yards was missed by all and hit the outside of the post. Then five minutes before the break Mildenhall made it 2-2 when another cross was not dealt with and the ball slowly went towards the post before Shaun Avis touched the ball home.

Before the break there was still time for Adam Vyse to see his effort well blocked by the keeper on the line.

The second half exploded into life with five goals in a nineteen minute period. On 47 minutes Ryan Melaugh ran with the ball, played in Adam Vyse who at the third attempt turned and scored. On 51 minutes it was 4-2 to Tilbury as a cross at the back post was kept in by Adul Salami, who played the ball

to Bryan Kyungu who squared for Emiel Aiken to hit home. The home side never gave up and pulled a goal back on 55 minutes when another cross this time from the left fell to Craig Calver to stab home. It was another seven  minutes before another chance came and this time it fell  to Tilbury. Adam Vyse played the ball through to the onrushing Emiel Aiken who played the ball unselfishly to Ryan Melaugh to slot home.

It was 6-3 on 64 minutes, when Toby Aromolaran ran from the half way line, beating 2 defenders, before unleashing a low effort in to the bottom corner for a fine individual goal. On 75 minutes Melaugh had two bites to score, but hit just wide as Tilbury continued some exciting attacking play. With four minutes to go, Lewis Jaggs saw red for his second yellow card reducing the Dockers to 10 men.

In the final minute Mildenhall’s Gareth Simpson struck a super effort from 20 yards passed the helpless Louis Hawes to reduce the score again to two goals.

That was the last meaningful moment of the game to send the 162 supporters home with a game to remember. The result saw Tilbury leap over Mildenhall into ninth place and the Dockers are now joint leading scorers in the league.

Tilbury are back in action on Tuesday night when they welcome inform side Bowers and Pitsea.