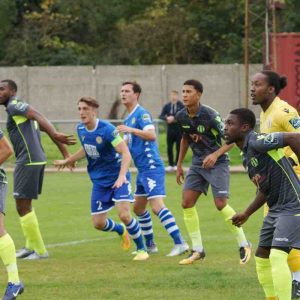 After an impressive performance on Tuesday evening Blues fans were questioning before the game whether they could build on that victory and which team would turn up at Hertford; well they got their answer – a team that was the polar opposite, lacking pace ,commitment and physicality and  too easily brushed off the ball.  All compounded with a needless penalty and all this despite Hertford being reduced to ten men for most of the second half. Blues have now met Hertford three times inside a month and in every game they have enjoyed the lions share of possession and chances and yet are still unable to convert all that into a winning platform now finding themselves floundering at the wrong end of the table. One could argue Hertford are a cynical outfit who push the laws of the game to the limit but unless Blues adopt a more streetwise approach then they are in for a long and arduous season.

Manager Jamie Stuart named the same starting eleven from Tuesday with Jamie Slabber and Perry Dunn among the substitutes after returning from injury.

Hertford made a positive start forcing an early corner the ball cleared to the edge of the area found Edwards who tried his luck but blasted over. Another break saw O’Connor who was given far too much room break down Blues right flank sending over a deep across to the far post that found the head of Light who failed to trouble Lamar Johnson.

Blues belatedly stirred and it was Adeyinka Cole who had their first opportunity from a free kick touched on by Glenn Poole fizzing the ball just over. Kai Brown then threaded a ball out wide to Kieran Bishop racing to the byline he sent a low cross into the home box which just eluded the onrushing Callum Ibe.

With 25 minutes played Blues just about shaded possession but they were not troubling Mann in the home goal illustrated when Cole found space on the edge of the box but again failed to hit the target and blasted over.

Hertford created an opportunity when a quick break saw Blues back line wrong footed the ball was cleared ineffectively allowing Bond an opening but he failed to hit the target,just minutes later Bond was again on hand slipping in behind the Blues rearguard but was ruled offside when a goal looked imminent.

As a spectacle the half had provided little in the way of excitement for both sets of supporters, both sides guilty of careless play with few periods of fluidity.  Hertford’s’ use of the long throw being their most potent weapon and Blues’ slow build up failing to trouble the home rearguard.

Stan Muguo summed up the half when he gave the ball away needlessly allowing Hertford to break quickly the ball eventually fell to Wade who tested Johnson with a blistering drive which the Blues keeper did well to turn behind for a corner. Johnson was called into action again making a another smart save from Toner.

The first chance of the half fell to Mugou on the edge of the box but once again it was wasted when he failed to hit the target  and just moments later Hertford were reduced to ten men when Beck went in over the top on Stuart and was rightly dismissed.

With a one man advantage Blues had the ideal opportunity to take control of the game but the fact  that they didn’t was partly down to their lack of urgency going forward and the cynical gamesmanship of their opponents who surrounded the referee at every opportunity and employed every trick in the book to disrupt and waste time. Poole mistimed a tackle moments after the red card incident, Hertford players led by skipper Sharman swarmed around the referee demanding a red card fortunately he was not swayed by their antics and brandished a yellow card.

Blues were now pushing their opponents back but their slow and lateral build up allowed Hertford to get numbers behind the ball and close down space, it was crying out for a Blues man to collect the ball drive forward and commit defenders but it never happened – too many times the ball was played across or back, the front men were also providing little movement resulting in the ball being pumped forward more in hope than certainty.

Chances that did materialise were not clear cut, sub Slabber did well to win a ball out wide but his low cross just eluded Cole, another sub Suley Zuhdu flashed a header over. A laboured build up eventually found Slabber who stooped to head just wide, a shot from Cole did find the target but was easily gathered by Mann.

Hertford dealt comfortably with Blues pressure and looked threatening on the break helped by some naïve defending with needless fouls inviting further pressure. That naivety came back to haunt Blues deep into time added on when another silly foul resulted in a penalty duly dispatched by Toner who gave Johnson no chance. Just minutes later came the final whistle and another disappointing defeat for Blues.

It seems the inconsistency that marred last season has continued into this one with Blues seemingly unable to put together a run of positive performances so much so that even at this early stage they find themselves playing catch up and languish at the wrong end of the table.

Wednesday evening sees Canvey visit Parkside for Blues first home league game since the August Bank Holiday; it will be a difficult encounter and nothing less than a 100% positive performance will be required to arrest their poor run of form.