Thurrock Labour continue to fight the “Battle of The Grass Tax” 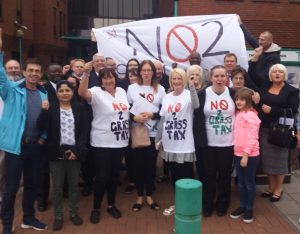 The Battle of the Grass Tax

SEPTEMBER’S meeting of Thurrock Council sat until 12.30am as residents and councillors fought the ‘Battle of the Grass Tax’ over five and a half gruelling hours.

The marathon session of council saw the Tory administration come under extreme pressure on their new service charges being levied on council tenants. Led by No To The Grass Tax campaigner, Lorraine Imamzade, residents lined up to denounce the new charges with a huge petition of over 1,500 signatures and public questions. The opposition groups also applied huge pressure with sustained questions and a motion calling for the charges to be scrapped.

The new charges will see tenants hit with bills of hundreds of pounds per year for minimal grass cutting activity where there are even small communal areas of grass nearby.

Councillor Oliver Gerrish, Leader of the Thurrock Labour Group, said “We stand 100% behind the residents in their campaign against this unfair, unreasonable new tax. September’s council meeting saw the Tory administration exposed for what they really are. Both their terrible personal behaviour on the night, but also their determination to hit those least able to pay with the bill for their Government’s austerity programme, highlight their true colours.”

He continued “Frankly, this week we have seen a Tory administration out of their depth and unable to cope with the people-power and political pressure that has been applied to them. The way they lashed out, particularly at residents, was disgraceful. But so was the way they sought to avoid blame for the decision to implement these charges.”

Before the meeting, it was announced that the Grass Tax had been “suspended” while a number of anomalies were investigated. However, this did not satisfy councillor Gerrish who said “It is not enough to delay implementation – these charges needs to go.”

The meeting agreed a motion submitted by Labour’s councillor Barbara Rice that the cabinet should scrap the charges. Speaking on the motion, she said “I have brought this motion to this chamber to call on the cabinet to show they can and will act in a fair and equitable manner by rescinding this unfair and unjust charge.”

She called on the Cabinet to “go back to the drawing board and seek a fair way forward to balance their books. Don’t punish council tenants – it’s unfair, unjust and unacceptable!”

A review will now be conducted by the council’s Housing Committee, following which the Tory Cabinet will make their final decision. Local resident campaigners and opposition councillors have vowed to continue the fight.

The ‘Battle of the Grass Tax’ might be over, but it appears the war is set to continue.