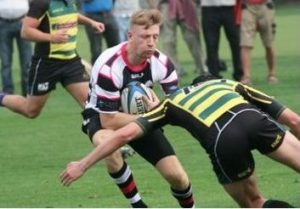 LONDON Cornish repeated the 57 point dose of their last home game, when they ripped apart visitors Thurrock in an utterly compelling opening 40 minutes of rugby in London 1 South at the Richardson Evans on Saturday, and it says much for the visiting side that they showed enough spirit to bounce off the ropes and land a try bonus point of their own in the 2nd period, as this was the most points they had conceded in a league match in over 2 years. The very healthy visiting support may not have enjoyed what they had seen, but nor should they have been surprised if they had been reading these match reports this season as Cornish are running into form. The match began with the London 2 South-West Champs playing towards the clubhouse on a perfect pitch in perfect conditions. Thurrock, who had come into the match having played 4 games, all of which were settled by less than one score, cleared long with the opening play. Their error was that they cleared it to former Northampton Saint and England 7s International David Smith, and their chase suggested they didn’t know what he can do. The full back waltzed past the run chase before spinning the ball to Kolapo-Ajala on his outside, the powerful wing simply having too much pace for the cover diving over by the posts for a try converted by Kimmins with barely 1 minute on the clock.

THREE minutes later, and it was Smith again whose pace, the incision made by Fletcher, and the full back turning on the afterburners to score wide right, this not converted. A further break from the Cornish Backs gave Goss the easy task of going over under the posts for a try again converted by the Kimmins. Cornish were now 19-0 to the good and already no way back for the visitors. The brand of rugby Cornish were playing at this point made it look as though they could score at will, and it only took 7 more minutes for them to wrap up the bonus point, when James La Broy. dived in over under the posts, the conversion a formality. A lineout catch just inside the visitors 22 on 33 minutes seeing a maul roll inexorably over the Thurrock line, the referee was unsighted but had seen enough to run under the posts, to award a penalty try 33-0 now the score and the Essex side losing a man to the bin in the process. Trent White wriggled free for a converted try by Jake Barrand on 34 minutes. But this was only cheer for the visitors when Kimmins scored and converted his own try on 38 following another Smith incursion, part of the Skippers 22 point haul on the day. The restart was sent straight down wing Hill ‘s throat, and he simply ran through the entire Thurrock side to score under the posts, Kimmins conversion meaning Cornish turned round 47-7 to the good – some of the seasoned Cornish supporters opined that they had just witnessed the best 40 minutes of rugby they had ever seen their team produce, and this against a team who until this day had the 4th best defensive record in the division.

Thurrock scored a second converted try on 50 minutes, when Ben Stanley making his second appearance in 5 seasons went over, Barrand again getting the conversion. An error at the base of Thurrock scrum just inside the 22, Hakes, pounced to fly hack on and dive over for another try converted by his Kimmins, the 50 points now up with 58 gone. With the home side down a man, then two, the Essex side sensed their moment, and when they finally crossed after a period of territorial dominance on 65 minutes when Tom Pool scored close to the posts, Barrand adding the extra’s.They sniffed a bonus point at 54-21. Kimmins sensibly calmed his team with a penalty on 69, Thurrock finally gave their travelling support something to cheer when they landed the bonus point try with 5 minutes left, as debutant Anthony Catchpole went over to give Barrand a simple conversion and added some gloss to their score with another near the final whistle, when Barrand himself run through to score and convert himself,