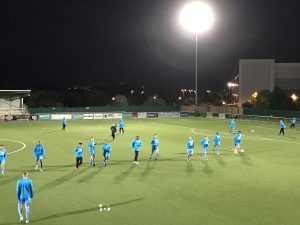 EAST Thurrock saw off Harlow Town in the Third Qualifying Round of the FA Cup.

Both sides never really got going but East Thurrock just seemed to have the edge on style and commitment.

The early pressure came from East Thurrock as they easily adapted to the artificial pitch.

The first clear chance came in the ninth minute when a smart shot by Sam Higgins in the area was well saves by keeper Ben McNamara.

Harlow seemed far too deep and it seemed a matter of time before the Rocks scored.

But Harlow nearly sneaked an opener in the eighteenth minute when a defensive mix up allowed Junior Dadson in but East Thurrock scrambled it away.

But East Thurrock were not as sharp as they should have been and were wasteful.

They paid for that in the 31st minute when Nigel Neita slammed the ball home from close range after good work on the right by Junior Dadson.

But the lead didn’t last for long as Reece Harris sneaked round the back in the 38th minute to equalise.

But it was a game in the balance and the half finished being anyone’s game.

With some advice from boss Covo at half time East Thurrock dominated the first part of the second half but without really threatening.

East Thurrock took the lead in the 63rd minute when Lewis Smith easily stroked the ball home from the edge of the box.

The impetus was now on Harlow to get back in the game but East Thurrock had that extra class with players such as Reece Harris and Lewis Smith on the ball.

The Rocks also had control and enough control of the game to frustrate Harlow Town.

But they saw the game out to face Ebbsfleet United in the next round.