Over a hundred move on from unlawful traveller encampment in Lakeside 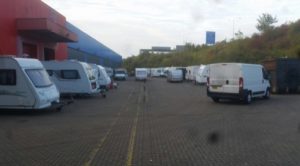 ESSEX Police worked in partnership with Thurrock Council following a report of an unauthorised traveller encampment in Lakeside.

Police were called to reports of a number of caravans driving on to a site in Weston Avenue at around 12.30am yesterday, Monday, October 2.

All five men were further arrested for aggravated trespass.

Around 100 people were moved on from the site in a controlled release overseen by officers on Monday afternoon.

The five men are due to answer bail on Friday, October 27.

Leader of Thurrock Council, Cllr Rob Gledhill praised Essex Police for their quick and decisive action yesterday. He said: “This was a large encampment on private land which caused disruption in the local community. I, along with local residents and the wider neighbourhood are pleased to see such quick action being taken. We cannot tolerate such blatant disrespect of the law – my thanks go to our friends in Essex Police.”