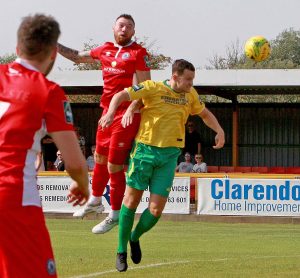 THIS Bostik Premier League tie saw Thurrock host Needham Market at Ship Lane. Thurrock went into the game having lost narrowly a week ago away in Lowestoft. Mark Stimson’s men were eager to put that result behind them with three points.

The first chance fell to the visitors as Needham striker Jamie Griffiths latched onto a long through ball and found himself one on one with the keeper. George Winn recovered well to put off the number 9 leaving Jake Jessup to smother the loose ball.

Thurrock saw a lot of the ball early on as they looked to control the tempo of the game from the off. Lewwis Spence sat deep protecting the back four which allowed him to spray passes from left to right.

Needham had the first corner of the game which was whipped in with pace to the near post but lashed over by captain Gareth Heath. On the 13-minute mark a heavy touch from Callum Harrison was met by a mistimed tackle from Adetayo Osifuwa which warranted a yellow card. The resulting free kick was cleared by Thurrock’s defensive line but only as far as Billy Holland whose curled effort was tipped wide by Jessup.

On the 18th minute mark Thurrock countered well when Ronnie Winn’s driving burst forward found the overlap of Lewwis Spence. The captain’s shot was blocked well by Jake Dye for Thurrock’s first corner. Minutes later and Thurrock combined well on the counter again. Remi Sutton and Ronnie Winn exchanged passes before the latter struck a left footed shot towards the near post, keeper Daniel Gay got down quickly to push it round the post.

Thurrock continued to press for the game’s opener as Dennis Oli held off his man before fizzing in a ball across the face of goal, just out of reach for Remi Sutton. Moments later Lewwis Spence picked out Jordan Clark’s late run into the box but the midfielder saw his header caught by Gay.

Lewwis Spence was enjoying space in the middle of the park once again. This time the midfielder’s cute ball forward met Remi Sutton’s late overlapping run on the left. The wingback brought the ball down neatly and lashed the ball across goal into the bottom corner.

Needham reacted well to going a goal behind and carved out a good chance when Callum Harrison turned sharply before lashing a 30-yard strike saved well by Jessup who smothered Holland’s rebound.

Minutes before the half time whistle Thurrock almost doubled their lead. Sutton got forward quickly again on the left-hand side and picked out Ronnie Winn with his cross. The number 10’s bullet header was again held by Gay.

Needham Market began the second period by making a change as Harrison made way for Ryan Gibbs.

Moments into the second half and Thurrock received their second caution of the game as Charlie Stimson lunged in on Dye after pressing the visitors back four. The Needham players and bench reacted loudly which resulted in keeper Daniel Gay going into the referee’s book for excessive complaints.

The referee would have to use his cards once again. Fleet defender Adetayo Osifuwa slid in late on Jack Simmons and received his second booking. Thurrock found themselves down to 10.

The Fleet reacted well, Reece Morgan slotted in at right back and Dennis Oli dropped into the right side of midfield. The number 11 beat his man and drilled a cross into the 6-yard box which was cleared. The game was now stretched and truly end to end. The clearance worked its way to the right channel where Spence was booked for a late challenge on the 72-minute mark.

Mark Stimson made his first and second change of the game as Jordan Clark made way for Jamie Price. Moments after, Leon Antoine replaced Ronnie Winn in attack.

Needham Market piled on the pressure since the sending off which forced Thurrock to protect their narrow lead. Charlie Stimson was a lonely figure spearheading attacks as Oli and Antoine were pushed back into midfield.

The visitors continued to push for an equaliser and looked to their bench for help as Jake Dye come off for Max Booth. Thurrock reacted by making their third and final change as Bobby Vaughan replaced Dennis Oli who put in a real shift in both defence and attack.

The board didn’t go up but there was a large amount of time added on. Frustrations grew in the away fans as Thurrock looked set to cling on. Crosses into the Fleet area were collected confidently by Jessup who eased the pressure.

The referee signalled the end of the game on the 95th minute.

Thurrock 1-0 Needham Market. It was a wonderfully worked goal that put the Fleet ahead but it was the team’s resilience that won it. A much deserved three points.