Thurrock Labour and residents call for action on “Lawless Thurrock” 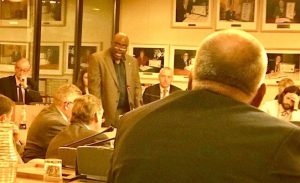 Thurrock Labour and residents call for action on “Lawless Thurrock”

AFTER the Conservatives made the decision to reduce the police presence across Thurrock, closing police stations and cutting police numbers, local residents have suffered a sharp rise in crime.

Predictably, with fewer police on our streets thanks to the Conservatives, violent crime and anti-social behaviour in Thurrock has begun to spiral out of control.

Thurrock Labour Leader Oliver Gerrish said: “As Labour has been campaigning across our borough and talking to residents about their concerns we’ve heard again and again how concerned people in Thurrock are about crime and anti-social behaviour in their neighbourhoods.

“You simply can’t protect Thurrock on the cheap, and a Labour council would ensure that we keep the pressure on Government to deliver more resources. A Labour Government would deliver 10,000 more police on our streets.”

The Labour motion to September council calling for more police resources was passed by the assembled councillors and Thurrock Labour have vowed to continue to fight hard for residents’ right to safe and crime-free communities.

Labour Councillor Barbara Rice added “People in Thurrock deserve to feel safe at home and in their communities and that will not happen when the Conservatives are recklessly cutting local police services. I’m proud the council meeting passed my motion calling upon the Essex Police and Crime Commissioner to provide more police in Thurrock.

“We are constantly harassed and terrorised by youths on motor bikes, scooter, quads and cycles. Old people robbed at cash points. People openly dealing drugs, and robbery against some of our most vulnerable, taking people’s phones, coats and money. It’s a disgrace.”

Also present at the meeting were a number of local residents who wanted to make a point about the poor council and police performance on crime in Thurrock.

Chafford Hundred campaigner Umar Kankiya raised the issue of car cruisers in the Lakeside area telling us “Living in Chafford Hundred, you’d be surprised to ever see the police.

“I’m fed up of Thurrock being neglected – we need change, we need the council to stick up for us.”

Another local resident, Lawson Akhigbe, called for better CCTV enforcement in Little Thurrock saying “I’m very disappointed at the council’s failure to tackle the growing number of crimes in the borough.

“I’m glad that Thurrock Labour is standing up for residents in the area – the Tories have neglected things for far too long.”

Cllr Gerrish concluded “I’m proud that campaigners across the borough are joining our calls for more police in every part of Thurrock – from South Ockendon to Stanford-le-Hope.”