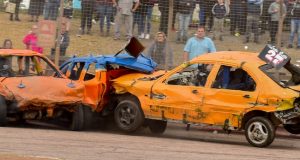 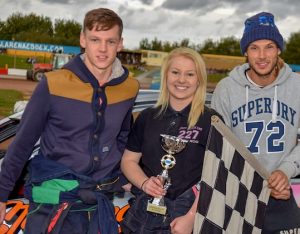 Winners were crowned at Arena Essex on Sunday as the Lightning Rod and Stock Rod formulas competed in their final meeting of the season.

BOTH formulas contested their Supreme Championship as the first race of the day. The Lightning Rod version proved to be rather a processional affair, with Dan Guidotti leading from pole position and heading home a train of cars, headed by Anthony Lawrence. Nobody seemed keen on taking to the slick outside line, so Lee Page continued the grid place to chequered flag theme in third ahead of the one significant mover in the race – Nigel Carroll.

For the rest of the programme, the points battle was what held the attention and in the second race of the day leader, Anthony Lawrence extended his slender advantage by finishing ahead of his two rivals, Connor Reeve and Dan Guidotti, albeit behind race winner Chris Reeve. Reeve was again soon off into a lead he had no intention of losing in the last race of the day, but a game of chess was going on behind with Connor Reeve so intent on keeping Lawrence behind him that he got boxed in by a backmarker and saw Guitotti launch an attack up the outside. With Lawrence also spotting the opportunity, Reeve was railroaded backwards and at the flag found himself not only behind Lawrence in the final standings, but also a point behind Guidotti.

The Stock Rod Supreme Championship got off to a dramatic start with the outside pole runner, David Crouch, getting better traction off the grid than pole man, Michael Seex. Crouch was ahead by half a cars width as they entered the first turn, but Seex was unwilling to give up the place without a fight and the two came together, Crouch sideways in front of Seex for the whole of the first corner before being able to assert his authority on the back straight. Jon Turvey spun at the end of the first lap causing chaos as the pack scattered – Jody Hawkins getting damage as she hit the Turvey car. With Crouch away and gone, Seex defended second place particularly robustly, constantly fending off Carl Shackleford and even having him sideways as he attempted to cut across him on one lap. This sent Shackleford sliding wide , losing him places, but allowing father Wayne to now take the challenge to Seex. To ensure he didn’t allow anyone up the inside, the pace being dictated by Seex now meant that quite a queue had formed behind, but despite all their best efforts Seex was not to be denied, heading home Wayne Shackleford and Scottish visitor Cameron Doak.

After a Gary Hicks win in heat two, Jody Hawkins drove the race of her life to win the Terry Skeef memorial trophy at the end of the day. Despite a lowly finish in this race, Crouch ensured himself of the Track points title for the second consecutive year. Wayne Shackleford finished one place ahead of son Carl in the final race, meaning he pipped him for second place in the overall points, Carl joking that he should have spun him out when he had the chance.

A big grid of PRI Bangers competed for the Terry Skeef memorial race. It was a strangely quiet day for the class, with race wins going the way of Tom Greenstreet, Paul Elliott, Gray Edmunds, Billy Crittenden and in the final – Tommy Harding. The Destruction Derby provided the best action of the day although there was some concern for Chloe McNeil, who was followed hard into the fence shortly after the start. Thankfully she suffered no broken bones. Jake Sheldon was putting on a good show and despatched the larger car of Gary Lee into the debris on turn three, but when he crashed Tommy Parker near the start line, he left himself prone to a couple of hits from Daniel Wilson, the latter taking the last car running award.

Three straight forward Stock Car races saw a hat trick for Vic Bilky Jnr. The formula was added to the programme quite late in the day which in some way accounted for the poor entry, but that is to take nothing away from Bilky, who was faultless.

The next action at Arena Essex is going to be quite some event as the veterans return to the track for the annual National Banger PRI Legends raceday for the Ronnie Martin memorial. At the time of writing the entry already stands at 68, with a few of the competitors probably at that equivalent age! Despite their advancing years, this is often one of the heaviest hitting days of the year as the racers blow away the cobwebs, and roll back the years. Supporting the senior citizen Banger category will be the 2.0L Stock Cars and some of the youngest members of the oval racing community – the Junior Mini Stox. The start time is 1pm.