Blogspot: “Labour is on a journey to government” 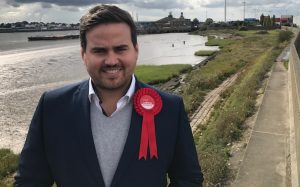 THIS week parliament returns for what is supposed to be the most important period of the year. Free from elections around the corner, a recess or a party conference on the horizon, October, November and December is the time when Governments tend to pass legislation and implement reforms.

Something tells me that won’t be happening this time. You see, I’ve just returned from the party conference seasons and the difference in moods at the two could not have been more stark: Labour were euphoric; the Tories divided.

Say what you will about the Labour Leader (and I’ve said a fair bit), the party is in a good place right now and it was reflected in the mood of the conference. Labour’s critique of the government leaving people behind, the economy not working for everyone and the return of the ‘nasty party’ is gaining traction all over the country.

The story couldn’t have been more different in Manchester with the Conservatives. Yes, the Tories are right behind their leader, but only so they are better placed to stab her in the back.

The party, as well as the country, is waiting for the news that May is going. As Grant Shapps said: ‘No serious politician believes Theresa will lead us into the next General Election’. The sense of anger towards the Prime Minister was palpable. So too was her absence. To say she kept a low profile was an understatement.

Far more importantly, however, is the fact that it is now clear that the Conservative Party no longer even pretends to have the answers to the big questions facing our country.

If you take Brexit out of the equation, there is very little else left that adds up.

They are panicked about losing young voters but have only offered to freeze tuition fees and raise the amount at which a graduate starts paying back. Compare that with Labour’s offer to scrap fees entirely and introduce a National Education Service for lifelong learning for the many, not the few.

And they are closing their ears to the experiences of those who are struggling to make ends meet and keep up with the rising costs of living. So they are refusing to budge on issues such as Universal Credit, showing how far removed they are from real life in today’s Tory Britain.

Given the way in which social care, pensions and grammar schools became such critical issues in the General Election, you would have expected to hear more about how the Government will bring about change. We heard nothing.

Most Ministers used their speeches to attack the Labour Party. But not from a position of strength, but out of fear. The Tories are afraid. The party is in disarray. The life has been sucked out of it. The debate that used to fuel the party – Europe – has been settled “once and for all” as David Cameron used to say, and he was right. The problem for the Conservative Party is that the debate has been settled, the answer is Leave and it has left the party in ruins.

Membership is around 20% of Labour’s. Strength on the ground is non-existent. They are not in a happy place. Compare that to the thousands of activists that are turning out each week for the Labour party on doorsteps in marginal seats and the growing credibility that Labour’s economic policies are attracting and you can understand their concern.

The truth is that the Conservative party is paralysed. They don’t know who their enemy is. Is it Labour? Or is getting one over Monsieur Barnier more important? Is it the French? The Germans? The Remainers? Is it Boris? Who is their enemy and who are they focused on beating?

And whilst the Government tries to figure out its direction, it is people in constituencies like Thurrock in South Essex that are suffering.

The Government should be rigorously pursing policies that promote inclusive growth. That means not just creating jobs, but making sure local people have the skills necessary to go into these jobs. It means being able to upskill adults who have fallen out of work through no fault of their own and who need to train in a new industry which requires different skill sets.

It means revolutionising the school system, making further and higher education accessible to as many of our children and grandchildren as possible. It means reforming the housing market to not only ensure supply can cope with demand, but that the homes are suitable accessible so that we can live and work into old age more easily. And it means recreating the sense of community that has diminished in recent years.

The Conservatives are not having the debates about how to forge a Thurrock that answers these questions. Labour on the other hand is.

Labour is on a journey to Government. A year after its second leadership contest in 12 months, it has fought a general election and ended up inspiring hope in millions of people and it has a Leader with clear vision of what he wants the country to look like. Who knows, maybe we are heading for Labour MPs in Essex once again.

3 Responses to "Blogspot: “Labour is on a journey to government”"