Flog It set to come to Tilbury 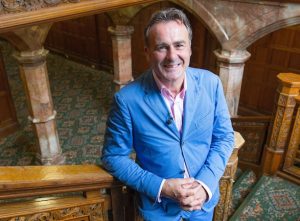 FLOG IT, the popular BBC One antiques programme presented by Paul Martin will be holding a free valuation day at the London International Cruise Terminal, Tilbury on Thursday 2nd November. The Bristol based BBC production recently transmitted its 1000th episode and the 17th series is currently being recorded. The show regularly achieves an audience of more than two million viewers in its weekday afternoon slot.

Members of the public are invited to come along to the Cruise Terminal at Tilbury docks, a grade 2* listed building opened in 1930, with up to three antiques or collectables they might be interested in selling. Once valued, the owner and a team of experts decide whether an object is filmed and if it gets sent to Stacey’s Auctioneers, Rayleigh for inclusion in their sale on Wednesday 22nd November.

Everyone who goes along to the valuation day will receive a free appraisal of their items – even if their antiques are not chosen for filming or to go forward for auction.

Presenter Paul Martin said “It’s great to be bringing Flog It back to Essex; I’m so pleased to be getting an opportunity to share this part of the world with our viewers. We always receive a warm welcome whenever we come to the county and I’m hoping plenty of people will take the chance to bring along their items to show us”

The BBC will be making four editions of the show featuring London International Cruise Terminal and they will be transmitted within eighteen months of recording. Paul Martin will be joined at the valuation day by on screen experts Philip Serrell, Elizabeth Talbot and Nick Davies.

BBC Flog It will be at London International Cruise Terminal, Ferry Road, Tilbury, Essex, RM18 7NG between 9.30am and 4.00pm on Thursday 2nd November. The items selected for filming at the valuation day will go under the hammer at Stacey’s Auctioneers in Rayleigh on Wednesday 22nd November.