Fleet and Regent Serve Up A Thriller 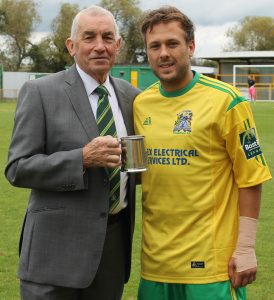 Reece Morgan made his 100th appearance in Fleet colours on Saturday

Thurrock welcomed last year’s Divison One North champions back to Ship Lane for Non League Day. Recent games between the two sides have been close affairs and today was no different as the balance of play ebbed and flowed between each team.

The early chances fell to Thurrock with Charlie Stimson spinning his defender in the first minute and shooting from thirty yards but straight at Brightlingsea custodian Sam Cowler. George Winn’s free kick is headed back across the area by Stimson, the ball gets sliced high in the air by a defender and falls to Joel Nouble who pings over the bar. Jake Jessup’s free kick is flicked on by Dennis Oli for Reece Morgan to side foot over.

Thurrock had been shepherding Brightlingsea’s early attempts to safety but conceding a free kick just outside the area was to prove costly. George Doyle stepped up and powered the ball beyond Jessup’s reach into the top corner.

Joe Bruce thwarts Brightlingsea cutting out a long ball forwards but the ball is thrust forwards again before George Winn blocks it behind for a corner. Thurrock’s midfield gain some traction as the game progresses. Joel Nouble progresses down the left wing demonstrating great strength as he shrugs off challenges and carves through four players before getting a shot away from a tight angle but without enough pace to bother Cowler.

Jamie Price wins the ball in the centre of the pitch and gets Thurrock on the front foot winning a throw. Remi Sutton takes and the ball finds its way to Dennis Oli to spin and shoot in one fluid movement to level the scores.

Thurrock are queuing up to get their noses in front. Stimson jinks his way into the area and puts the ball into the penalty spot, a mad scramble before first Sutton sees his shot blocked and then Cowler is down to save Price’s follow up. The agile Nouble again holds up the ball before setting Stimson who is bowled over at the edge of the ‘D’ but the resulting free kick is cleared away.

A frantic final five minutes. Billy Hunt takes a snapshot from thirty five yards which the unsighted Jessup is glad to see curl just wide of the upright. Joe Bruce finds the ball at his feet from a corner and sees Cowler pull out a point blank save, the rebound sees Regent break away and force a corner which Bruce clears.

The half time break wasn’t kind to Thurrock as inside a couple of minutes Brightlingsea get the ball in from the left wing and Robbie Rees pokes home from close range. The pain is extended a few minutes later as Joe Bruce loses his footing and Brightlingsea are clean through on goal, Jessup stands tall and imposing and blocks the shot but it falls to Billy Hunt for a tap in.

Thurrock look to reduce the deficit and get back in the game. A huge clearance from Jesup is helped on by Stimson to Nouble, Joel switches the ball to the other side of the box for Ronnie Winn to see his shot blocked. Jamie Price takes control of the ball and seeing a clear path to goal unleashes a fierce shot from distance that Cowler takes no chances with and punches over the bar. But play is still end to end as Jessup pulls out an important save of his own from a strong shot from the right hand side.

Twenty minutes left and Thurrock are still in the hunt. Oli, Nouble and Adetayo Osifuwa pushing forwards pass amongst themselves on the left wing before finding Stimson who draws another save from Cowler. Ronnie Winn’s cross for Lewwis Spence won’t settle and Brightlingsea clear but the goal is coming and it starts again with a Remi Sutton throw, this time it is Stimson who finds the ball at his feet, a touch to control and then he nearly bursts the roof of the net putting everything into the shot.

Ten minutes plus added time, is it enough to get a point? Well, yes it is but not until the last minute of regulation time. Again, the move starts from a throw from Osifuwa this time. The ball pinballs around off shoulders, shins and shirts before falling to Spence. He somehow finds a path to goal through the crowded area beyond Cowler’s despairing dive.

Having got back into the game through sheer determination and never say die attitude Thurrock can smell a victory and intensify the pressure. Oli, Sutton, Winn and Leon Antoine probe Brightlingsea’s defence and win a corner, the ball sails in and is glanced away and as the ball crosses the bye-line the final whistle is blown.

An entertaining game for Non-League day where both teams might feel hard done by not to get all three points.