Petition calls for larger vehicles to be banned from Dartford Tunnel 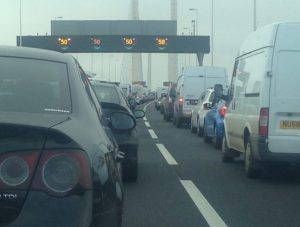 A PETITION calling for larger vehicles to be banned from the Dartford Crossing is growing in popularity.

Managing Director of Europa Logistics, Andrew Baxter launched the petition on Monday. So far it has gained dover a 1,000 signatures.

“We propose a simple solution: Stop the Convoys and get Dartford moving. Traffic at the Dartford Tunnel is brought to a standstill on average 100 times a day by a small number of oversized & hazardous goods vehicles which need to be escorted through the tunnel, in a convoy.

Each convoy can take up to 2.5 mins to travel through the tunnel, and a tunnel is closed around every 15 mins.

Why should 99% of drivers suffer due to less than 1% of vehicles?

“Our suggestion is simple: Stop these oversized/hazardous vehicles using the tunnel & send them the other way around the M25”.