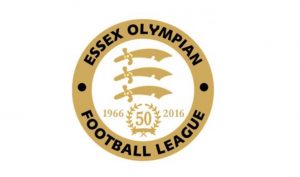 Springfield left it very late and in the process broke Old Southendian’s hearts. The visitors were leading 1-0 with Stuart Judd scoring the goal that gave  them the lead. And as the game came into the closing stages it looked like a shock result was on the cards. However the Premier Division champions then equalised two minute s from time courtesy of Joe Mayer and then in stoppage time Alfie Halliday fired home the winner to see Springfield through – but they were pushed all the way for it.

There was a shock though as the holders Basildon Town were eliminated by Newham United. Omar Jomanday had scored the Newham United goal in normal time and then his side went on to win the penalty shootout 4-3. Frenford also needed extra time in their tie with Divison One outfit Buckhurst Hill before finally running out 5-4 winners. Another Premier Division side that made progress was Kelvedon Hatch who saw George Saunders score a hat-trick with Mike Daniels providing the other goal in the 4-0 win over Snaresbrook. Manford Way also won 4-0 with Sam Cole (2), Julian Edwards and Tom Herbert their scorers in the win over Dagenham United.

The all-Premier Division affair between Canning Town and White Ensign went the way of the Southend-based club – but only after Canning Town had seen a man dismissed. Josh Thompson and an own goal had given Canning Town the lead twice. Gary Ticehurst levelled it to 1-1 and then White Ensign equalised and then took the lead as Conor Barmby converted two penalties. Goals in the second half from Jamie Brown, John Hilliard and Gavin Paoletti saw White Ensign progress via a 6-2 win. Another Southend-based club also hit six as Nathan Dewberry’s hat-trick was added to by strikes from Mike Sammut, Dan Williams and Dan Trenkell which saw Catholic United extinguish Epping’s interest in the competition with a comprehensive 6-0 win.

Westhamians from Division Five beat Newbury Forest from Division One 5-0 with Ryan Creed and Ben Jones both scoring twice. Lewis Lawrence notched the other goal in a shock result. Jared Cousins and Alfie Bond were the Galleywood scorers in a 4-2 reverse at Harold Wood Athletic. Scott Mortlock was also a scorer that tasted defeat as his goal for Herongate Athletic was cancelled out by Ramsden Scotia who went on to win the game 3-1 with John Burdett, Kurt King and Ryan Leddra all scoring for Ramsden. John Smithwick also scored but ended up on the losing side as Southend Sports won 3-1 at Runwell Sports. Great Baddow beat Sungate 3-1 with Sam Mead, Dan Gage and Ryan Baxter scoring the goals that cancelled out Sungate’s one effort which was scored by Jake Clarke. Toby are also in the next round after they put aside their winless start to their Division Two campaign to edge out Hutton from Division One. Arron Watson-McNab, Simon Bamidele and Peter Spicer were their scorers in a 3-1. Thomas Price scored the Hutton consolation.

May & Baker E.C. were able to extend their lead ever so slightly but had to come back twice against bottom-placed Rayleigh Town, who almost captured all the points when Alex Witham hit the cross bar in the closing stages. That would have given the Rayleigh player his hat-trick, having twice fired Rayleigh into the lead. James Barlow and Richard Oxby were the men that made sure May & Baker were at least able to put something on the board after a spirited display from their opponents.

Harold Hill were able to haul themselves into the promotion zone after picking up a point at Shenfield AFC. George Shelvey scored their goal with Will Marlowe doing likewise for Shenfield. FC Hamlets also move up the table after 1 4-0 win over Old Chelmsfordians who remain winless after this encounter. Charlie Heatly scored a brace with Ashley King and George Oakley also providing goals.

Leaders Ongar Town slipped up at Ryan who started the day holding up the table and ended it by lifting themselves up to eight after posting their first league win of the season. They even gifted Ongar a goal on route to a 5-2 victory. Krys Goliebioski helped himself to four of the goals with Umut Onay also getting in on the action. Lee Perry scored the other Ongar goal,  who remain top despite the result. Upminster also posted their first point to the board after a 1-1 draw with Rochford Town with Warren Taylor scoring their goal.

Shoebury Town now lead the table after an emphatic 9-1 victory at Debden Sports. Dom Binns ripped Debden’s defence to shreds claiming five goals in the process;  Aaron, Daryl Cooper, Scott Clarke and Ben Rowe also bagged goals with a total white wash being prevented due to Steve Bryan adding one for Debden. Old Chelmsfordians Res. however scored even more as they put twelve past Leytonstone United, also keeping a clean sheet in the process. Elliot Walker scored a hat-trick; there were braces for Martin Mixture, Max Green, Tom Tinsley-Gardner; while Harry Green, Lewis Snelgrove and Semi Akinolou also scored a goal each. Manford Way Res. beat Leigh Town 3-0, while Harold Wood Athletic also won on the road as Connor Hartwell scores both their goals in a 2-0 win at Hutton Res. Karl Swanborough and Troy Hawthorne score a goal each for Beacon Hill Rovers who are held to a 2-2 draw by lowly Roydon. Mo Benzid and Liam Oliver score the Roydon goals.