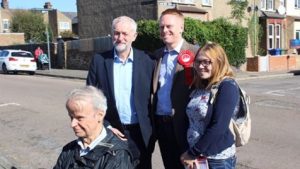 JUNE 2017 was, for the Labour Party, so near and yet so far. Nationally, we were just 7 Conservative seats away from being able to begin the formation of a government with other parties – yet we were also 64 seats away from being able to form a majority government on our own. Here in Thurrock, we put on an extra 3,379 votes from 2015 – yet we were still 346 votes away from electing the first Labour MP in 7 years. With these facts in mind, it is time to re-build and secure Labour’s coalition of voters in time for 2022.

The Labour Party has always been an internal coalition: Unions and CLPs; Fabians and doorstep activists; shop stewards and councillors; Momentum and Progress; Firebrand Hardie and Oxbridge-educated Attlee. It is, however, Labour’s geographical coalition of voters that has always steered it to Parliamentary majorities: its metropolitan strongholds, its post-industrial heartlands, and its Scottish bastion.

Labour was placed on life-support in 2015 when Scotland abandoned it and some of its heartland seats began to waver. Thankfully, though, 2017 saw a net gain of 30 (including 6 in Scotland) seats and a 9.5% increase in Labour’s vote share – Labour is now out of intensive care and on the firm and secure road to recovery. Some of the wins were staggering: Croydon Central, Reading East, Sheffield Hallam, and Enfield Southgate – the famous backdrop to the 1997 ‘Portillo Moment.’ When you consider the coup of taking Canterbury and Kensington, you can see that something special was happening in the early hours of 9th June 2017.

However, this success has to be balanced by the loss of the heartland seats of Stoke on Trent South (Labour since 1950), Mansfield (first gained from the old Liberal Party in 1923), and Walsall North (represented continuously by David Winnick since 1979). There were some near misses, too: Barrow & Furness (held by 209 votes), Newcastle under Lyne (held by 30 votes), and Dudley North (held by 22 votes). In fact, YouGov have stated that the Tories won a plurality of working class voters for the first time since the days of Margaret Thatcher.

Labour has very, very deep support – 29 out of the top 30 safest seats in the country are held by us. The job now is to ensure that the soft underbelly of the Labour voting coalition is made impregnable again. Yes, winning Portsmouth South is brilliant, but this must not be instead of retaining the Sellafield workers and manufacturers in Copeland (held by Labour, until a by-election in 2017, for 82 years).

The task will be won in two key ways: policy and identity. Our manifesto section on ‘work’ summed up why working class people are suffering:

‘Work should provide people
with security and fulfilment.
But for too many people work
is insecure and does not make
ends meet.’

Our Party must, therefore, be more forceful in selling its specific 20-point plan for security and equality at work; working people need to know, without equivocation, that it is the Labour Party that has ‘got their backs’. More generally, the party of labour needs to lead the debate about the changing patterns of work in today’s society. We need bold and innovative ideas for those who work within the ‘gig economy’. To thrive in the future, workers need lifelong learning opportunities, secure and affordable housing, and business long-termism.

As a Party, we were able to straddle the UK-wide identity divide over Brexit. We were the Party of neither the 52% nor the 48% – we were the Party of the 100%. As a result of Jeremy Corbyn’s campaign (focusing on the bread and butter issues facing people today) Labour didn’t see voters as ‘Brexiters’ or a ‘Remainers’; we simply saw ordinary working people trying to get on with their lives. This identification with Labour values needs to be reinforced so that, just as the metropolitan strongholds identify firmly with Labour, so do the wavering heartlands and the lukewarm bastion.

And now to the ultimate bellwether seat, our home: Thurrock. The place to start, in the 2018 council elections, is locally. Previous Thurrock Labour administrations have been transformative for the people of Thurrock. The leadership of the late Andy Smith brought unitary status, and the chance to transform our own destiny. The administration of Cllr John Kent brought financial competence and transformed our schools and life chances of our young people. A Labour administration led by Cllr Oliver Gerrish will be equally transformative and for the betterment of the people of Thurrock.

For the constituency, Thurrock needs the new Andrew Mackinlay for our time – an ‘Andrew Mackinlay 2.0.’ We need an MP who will be Thurrock’s representative in Westminster, not Westminster’s representative in Thurrock. We need a diligent caseworker, a dogged campaigner, and a determined voice on the streets of our borough, as well as the green benches of the House of Commons.

The final piece in in the jigsaw is the need for a majority Labour government led by Jeremy Corbyn – a government for the Many, not the Few. His recent visit to Thurrock shows that he knows that the road to 10 Downing Street runs through Thurrock. From council to constituency to country – this is the course for the Labour Party, for Thurrock, and for the nation.