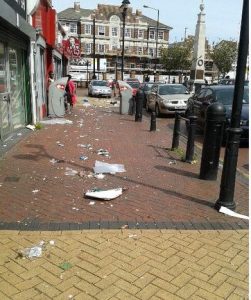 AT this week’s Cabinet meeting (Wednesday 11 October), Portfolio Holder for Performance and Central Services, Cllr Deb Huelin, presented the performance report for the first three months of the year.

Thurrock Council measures and reports on 39 Key Performance Indicators (KPIs) in order to track the performance of services and 64.1% were achieved between April and June.

Areas which the report focussed on include street cleanliness, primary schools judged ‘good’ or better and all the KPIs in Adults Social Care and Health – all of which were achieved.

The report also explained the failing recycling target, as well as the action which is being taken to address it – such as a targeted education and communications campaign.

For the first time since introducing the tougher target, 100% of potholes were repaired within the agreed timeframe between April and June.

Cllr Huelin, said: “I cannot recall a time when performance on or above target was this high. I know a lot of hard work has gone into getting us to this point – and I hope we’re able to maintain this to year-end.

“That said, we must not lose sight of those KPIs where we are failing. Following the changes I introduced, failing KPIs are no longer hidden behind an ‘amber’ rating. Making them either ‘pass’ or ‘fail’ is more transparent and shows where our areas of weakness are.

“We need continue being proactive and ensure we are always improving.”