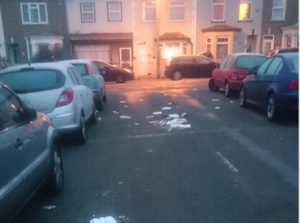 As part of the council’s clean it, cut it, fill it initiative, council enforcement officers are taking a tougher approach

A private alleyway behind Oak Road, Grays was subjected to the dumping of building waste – which was transferred to Grove Road over time. Letters found allowed officers to identify the perpetrators and issue a fine.

Leader of the Council, Cllr Rob Gledhill, said: “For months the private alleyway near Oak Road was dumped on and was slowly being moved toward the highway. Once it reached Grove Road I reported it to officers, they were able to identify those responsible and take enforcement action.”

“Fly-tipping anywhere is not acceptable but when you are doing it in the heart of your own community it shows a lack of regard for your own neighbours as well as cost to public purse.”

Another case include dumping used car parts and oil in a car park in off Dock Road, Tilbury. The fly-tipper was cautioned on the spot admitted the dumping.

Letters found in a fly-tip of household waste in Bridge Road, Grays led council officers to the door of the perpetrators – who were issued with a £400 fine.

Rubbish from a house clearance was found in a communal storage area at Vicarage Square, Grays. A £400 fine was issued to the householder – who admitted to paying two unidentified and unlicensed traders to take their rubbish.

Portfolio Holder for Environment, Cllr Aaron Watkins, said: “Through clean it, cut it, fill it, our tougher approach is cracking down on those who spoil our borough.

“I want to thank the officers for their continued persistence in finding evidence so we can take robust action against perpetrators.

“I hope residents learn from these cases. If someone says they’ll take away your rubbish and the price seems too good to be true – it will be as you’ll face a £400 fine if you don’t check they’re legitimate.”