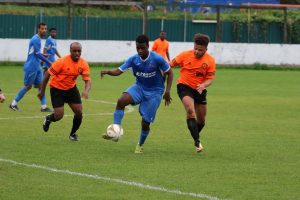 The Foxes made it three league wins in a row after victory over Barkingside in the Cricklefield derby. James Peagram notched the only goal of the game in the 68th minute. The win lifts Ilford into the top six whilst defeat for Side sees them slip down to 13th.

The Tons handed Rovers a rare defeat in recent times with victory at the Old Spotted Dog. Ikem Odeh bundled Clapton ahead before Jeffrey Cobblah sealed the points for the hosts who are now eighth whilst Rovers fall to second place.

Hullbridge moved up five places to fifteenth after a much needed win against Hackney Wick at Lower Road. Luca Frankis put the hosts ahead in the ninth minute and then nine minutes into the second half Ollie Miller slotted Sports further ahead, before he grabbed his second in stoppage time to seal the hosts victory and a welcome three points. Defeat leaves Hackney Wick third from bottom as a result.

The Motormen left it late to grab victory here after coming from behind to take all three points against Sporting Bengal United at Oakside. Reside Coxi Sebastfao put the hosts in front on 11 minutes but saw the visitors fire back through Steven Carvell on 21 minutes and then Kai Parkinson six minutes later to see the Mile End side ahead. However Eljay Worrell found a leveller with just five minutes remaining before Calvin Poku popped up with an 88th minute winner to send Redbridge into joint second in the division.

Manor secured another three points after defeating The Robins at Crofters. Ross Johnson put the visitors ahead on twenty minutes before Alfie Lindfield and Jacob Cleaver added further goals late on in the first half and saw Manor in total command at the break. Sawbo grabbed one back in the second period before Manor’s Johnson was sent off, however defeat for the hosts leaves them down in seventeenth whilst Manor are now fourteenth.

The Airportmen are up to eleventh after defeating a struggling Waltham Forest side at Hargrave Park. Ryan Ramsey gave Stansted a ninth minute lead before Jevoy Blair doubled their advantage on twenty minutes. And Ramsay netted another in the 27th minute as the hosts took total command. Forest, who pulled one back through Marco Faria in the 68th minute, are now down in sixteenth place.

Hosts Takeley saw off a very stubborn Enfield to go to the top of the table after winning a nine goal bonanza at Station Road. Mitchell Das and Fred Burrell goals had the hosts two goals up inside twenty minutes before Lopes De Matos pulled one back midway through the first half; but Reece Barrett then restored Takeley’s two goal cushion in the 25th minute. The visitors fought back though with goals from Lopes De Matos seven minutes into the second half and then Luke Thomas in the 65th minute to level it up at 3-3. But the home side managed to retake the lead through Will Green seven minutes from time before Green added another in stoppage time to seal the points. Ben Bradbury did pull one back for Enfield in the 94th minute however it’s another defeat for the Harlow-based side despite scoring four past a defence who had only conceded five goals in their previous eight league games.

Hamlets battled back from two goals down to earn a draw with FC Romania at Mile End. The visitors led on six minutes courtesy of Gabriel Ghinea and doubled their lead just past the half hour mark when Sergiu Pitaru hit the net. Wale Odedoyin reduced the arrears just before half time before adding another just after half time to make sure his side took a well earned point.

Lodge showed terrific battling qualities to salvage a draw at home to West Essex. The visitors hit the front ten minutes before half time through Michael Mignot and the same man doubled their lead five minutes later. Lodge pulled one back twenty minutes into the second half through Danny Palmer but with fifteen to play Mignot completed his hat-trick and had seemingly given his side the points. But Lodge had other ideas and Ben McAllister netted with ten minutes to go before Ben Masuku levelled in the third minute of stoppage time to break the visitor’s hearts.

Basildon drop to fourth after they fell to defeat at Goffs Lane against an improving Woodford side. Larry Asare gave the hosts an 11th minute lead before the returning Marcus Bowers equalised for the Bees. Ash Blackburn then gave the visitors the lead but saw Ola Ogunwamide level with ten minutes remaining before Jack Grosvenor netted late on to give the hosts another three points and see them up to ninth.