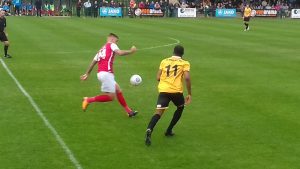 With so much at stake it wasn’t surprising that both teams fought for every ball at the FutureFuel Stadium on Saturday. The visitors from Kent ply their trade in the Vanarama National League but found their lower league hosts up for the challenge and the Rocks were able to give their higher-placed opponents enough to think about during the entertaining ninety minutes.

The first chance of the game fell to the Rocks with Harry Honesty firing just over the bar inside the opening minute. The visitors responded almost straight away with a cross-shot from Sam Shields being cleared off the line by Ryan Sammonds. Danny Kedwell also let fly with a shot that Lukas Lidakevicius parried. Then it was the Rocks who went forward again this time Montel Agyemang drilled a shot that Nathan Ashmore blocked.

It was certainly a lively start with an Agyemang free kick testing Ashmore and then a nice passing move linked up Max Cornhill with Lewis Smith who then fed Agyemang, but the final shot lacked power and it was easily saved by the visiting keeper. Lidakevicius was also called upon to save a Kedwell header, who had headed it straight at the Rocks custodian after a fine delivery from Myles Weston.

Kedwell has Football League experience with Gillingham and was trying to intimidate the Rocks defence, twice clattering into Marvin Ekpetita and also being a little too over-zealous when chasing one ball that ended up with George Allen being pushed to the floor. Maybe it was also frustration as the well drilled Rocks defence kept Kedwell under lock and key and he wasn’t able to get as much service as he may he liked.

The Rocks had been caught offside a couple of times and Smith had also worked his way into the box before being halted by a stern Jack Powell challenge before they were able to have their best effort of the game thus far. A corner ball was headed goal wards by Sam Higgins and it was only a whisker away.

Then right on the stroke of half-time the Vanarama National League outfit thought they had taken the lead when a fine delivery from the left was headed past Lidakevicius by Kedwell. Celebrations were short-lived and there was some anger too amongst the visiting players and fans who felt that the offside decision was the wrong one.

The second half saw both defences remain tight. George Allen dispossessed Shields with a solid challenge while at the other end Higgins on two occasions found his progress hindered by the imposing defending of Chris Bush.

It was the hosts who had the first chance eleven minutes into the half when Agyemang retrieved the ball just inside the Fleet box but the visitors put bodies behind the ball leaving no clear route to goal and so Agyemang’s shot ended up being blocked. At the other end Powell drilled a lot shot well wide of the East Thurrock goal.

Agyemang, Honesty and Higgins all tried in vane to get a look in but the Rocks were enjoying much more possession. A Rocks corner in the 70th minute was headed onto the cross bar by James White and then Higgins finally was able to lose his marker but he couldn’t keep his shot down. A Lewis Smith A long-range drive by Lewis Smith  wasn’t too far off target either as the Rocks continued to press.  Ebbsfleet were not creating much by now apart from a Powell free kick that Lidakevicius claimed without too much difficulty.

The Rocks for all their possession were not decisive enough  in the box, while at the same time their defence had all but snuffed out Ebbsfleet’s forward momentum.  Then in the 85th minute Smith set Higgins free and he unleashed a blistering shot that saw Ashmore produce the best save of the game as he had to dive low and at full-stretch to tip the ball away.

In the end both teams will have to go at it again at Stonebridge Road on Tuesday with the draw for the 1st Round being tomorrow afternoon.