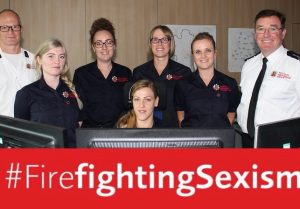 The campaign, which uses social media to spread the hashtag #firefightingsexism, asks people to use the term ‘firefighter’, after research revealed that many women think firefighting is only for men because of unrealistic perceptions.

London Fire Commissioner Dany Cotton launched the campaign on Monday (16 October) and said that the term ‘firefighter’ was a term that they had stopped using in the 1980s.

The Commissioner said: “I want to shake off outdated language which we know is stopping young girls and women from considering this rewarding and professional career. We owe it to tomorrow’s firefighters to challenge negative stereotypes today.”

The issue is just as relevant to the Essex community and ECFRS backing the campaign by publishing personal messages of support from its employees.

Essex County Fire and Rescue Service’s Chief Fire Officer, Adam Eckley, said: “The role of a modern day firefighter differs from outdated stereotypes which can put women off applying for the role or not even consider it in the first place.

“We value the contribution of all of our employees equally and strive to create an inclusive and non-judgemental environment. When you say ‘fireman’ instead of ‘firefighter’ you are ignoring some of our team – both our female and male firefighters work as one team to deliver a safer Service and a Safer Essex.

“A simple change of language can make all the difference to challenging stereotypes and opening up opportunities to our community.”