WITH the weather forecasted to be stormy Thames arrive at Upminster expecting a tough match and tough conditions. With a distinct slope to the pitch and the wind blowing down it Upminster won the toss and choose to play up slope and into the wind. Thames struck first with a well worked try through the backs, Max Clarke broke free down the left wing but was stopped by a very good covering tackle. As Clarke was taken down he off loaded to Rhys Dell who completed the move running over the try line to score. 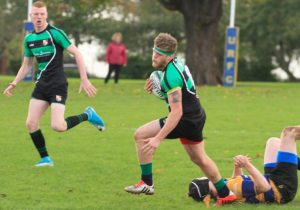 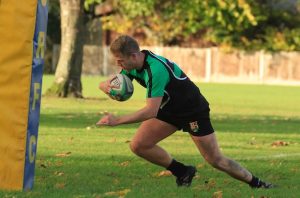 Jack Egar added to the Thames score line four minutes later when he crashed over the Upminster line after a series of phases starting from a penalty inside the Upminster half. Lee Cairns used the wind and added the conversion. With ten minutes of the first half to play Clarke went from try maker to try scorer. Clarke was put into space by his teammates and he showed a clean pair of heels to his opposite number to run in behind the Upminster posts. Cairns added the extra two with no difficulty.

Thames despite being three tries up were being tested in defence and Upminster found the holes just before half time as they broke away and scored under the post making for an easy conversion and the score line at half time 7 – 19 to Thames.

Upminster now had the slope and wind advantage and they didn’t take long to make good use of it as they stretched the Thames defence to score after just two minutes of play and adding the extra two points. Almost immediately after the restart Upminster were reduced to 14 men for 10 minutes. Three minutes later Thames suffered a blow when their front row replacement was injured and scrums had to go uncontested, the set piece had played a very large part in the game up till now and it was a shame that contest between the front 8 was over.

With uncontested scrums the platform for both teams was set to allow their back lines really to attack the opposition and it was Upminster that made the first hard break scoring close to the posts with the conversion following. Upminster now lead by just two points.

As Cairns kicked off Ryan Edgeway and Egar put huge pressure on Upminster. As the home side scrambled to release the ball into space a panic pass was made, and Cairns plucked the ball out of the air and jogged in under the posts. Cairns kicking into the wind took his time and made sure he added the extra points to put Thames back in the lead by 5 points.

With not much time left Thames had to frantically defend against a rampant Upminster side and hold on they did but not before Liam Smith was shown a yellow card. Defending close to their line Thames really put their bodies into defending and managed to turn over the ball. Calming themselves down Cairns put an almighty boot to ball to relieve the pressure. Up to half way Thames managed to retain the ball and at each break in play kept checking the what time was left. Having managed to retain the ball and with no time left on the clock Upminster impeded their guests and Cairns kicked the ball dead to close out the game. A very tight competitive game, Thames took the win by just 5 points 21 -16.

Every Thames player had played their part in a very dramatic game but one player stood out for his control of the weather conditions, the back line moves, his own part in the defence and rounded off by an interception try that gave the win to Thames, Lee Cairns was awarded Thames man of the match.