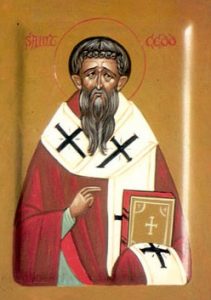 IN case you wondered, it is St Cedd’s Day. St Cedd is the patron saint of Essex.

Basildon Council are having a ceremony but it all seems to be a bit low key in Thurrock, which is a shame as he did found a monastery in Tilbury.

A short bio on St Cedd.

Cedd: A disciple of St. Aidan of Lindisfarne, St. Cedd was the brother of St. Chad, Cynebill, and Cćlin, all of whom became monks. Cedd, whom Peada of Mercia invited to preach among the Middle Angles, was ordained in 653. A year later, the priest was sent as a missionary to Essex, when the East Anglian king Sigbert converted to Christianity. Finan of Lindisfarne made Cedd bishop because of his success. Cedd founded several monasteries, including Tilbury and Lastingham. In 664, Cedd was an interpreter at the Synod of Whitby and accepted Oswiu’s adoption of Roman usage. Cedd died that year at Lastingham of the plague.

Conversion to Christianity: the earliest mention of a place in Thurrock

The 7th century saw the conversion of Essex (including Thurrock) from Paganism to Christianity, but it took three attempts. At the beginning of the 7th century, London was part of the Kingdom of the East Saxons – the people, not the geographic area. King Saebert converted to Christianity at the behest of his overlord, King Æthelberht of Kent.

Saint Mellitus became Bishop of London and his see included Essex. Essex reverted to Paganism on the death of King Saebert and Mellitus was forced to leave.
Around AD 655, St Cedd undertook a successful mission to re-convert the East Saxons and built churches at Bradwell and Tilbury. The building of the Tilbury church (on the banks of the Thames) was described in Bede’s History of the English Church and is the earliest written reference to a location in Thurrock. St Cedd became Bishop of the East Saxons, in effect, Bishop of London. He died on 26th October, AD 664. However, on the death of King Sigeberht II the Good, Essex again reverted to Paganism.