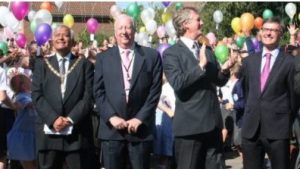 THE BOSS of the chain of Harris Academy schools that includes a number of schools in Thurrock has criticised the free school policy as too expensive and says extra money is needed to fund teachers’ pay rises reports The Guardian.

Philip Harris, now Lord Harris of Peckham, said his schools had already made £12m of savings but were now facing a further 20% real-terms cut in funding over the next five years.

He also criticised the government’s free schools policy as an expensive drain on limited resources and said the money would be better spent on turning round failing schools in order to create extra places.

Harris’s comments about school funding came at a time of growing pressure on budgets, which have remained frozen while costs have gone up. Schools are now bracing themselves for increased pay rises for teachers without additional funds to pay for them.

“They say give more than 1% pay rises to teachers, but there’s no more money,” Harris said in an interview with the Guardian. “Education is the most important thing in the country. It’s the future for children. What I think they should do is somehow put more money back into education.”

With a federation of 44 schools, Harris and his chief executive, Sir Dan Moynihan, have been able to make savings by more efficient procurement across the trust and have not had to cut maintenance or staff as other schools have. In future, Harris said the only way to counteract the cuts was to increase pupil numbers to bring in extra money.

On the government’s flagship free school policy, he said: “People love free schools because they are new buildings. But what people need to realise is this is where the money is going in government.”

He said they were expensive because they opened with small numbers of pupils in the first intake and only gradually built up. “We’ve got 12 to 14 free schools. We know how expensive it is. We know how much they lose.”