Red Devils set to parachute into Lakeside for Poppy Appeal 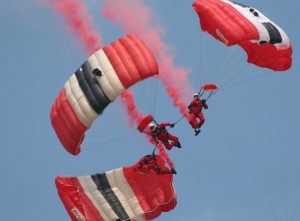 ON Friday 27 October, 12pm, intu Lakeside will launch the Poppy Appeal for Essex. Weather permitting, the Red Devils team will parachute into Alexandra Lake to hand over the first poppy of Essex.

With support from Thurrock Sea Cadets whose team and boats will be collecting the Red Devils team after the jump. intu Lakeside has partnered with their charity of the year, Treetops School, to hand back a poppy made by pupils that will be displayed at the Parachute Regiment, Colchester Barracks.

Visitors to intu Lakeside will be able to watch this iconic event from The Boardwalk or the footpath alongside the lake at 12pm with the handover of the first poppy taking place on the Boardwalk.

The Grays branch of the Royal British Legion, will be selling merchandise and poppies from 12:30pm on Friday 27 October – Saturday 11 November.