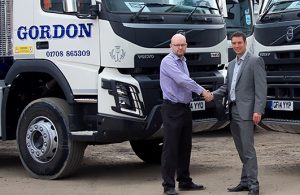 The FMXs will be deployed on blue chip construction projects in Central or Greater London and each truck will average just around 30,000 miles per year, due to the capital’s traffic congestion levels.

Based in South Ockendon, Essex, Gordon Group was formed in the year 2000. “We bought one of the first Volvo FMX chassis in 2011 and since then the FMX has proved the perfect choice for our operations,” reports Arran Gordon, Managing Director at Gordon Group, adding, “The standard Volvo FMX specification is much more comprehensive than other makes and in my opinion Volvo is the best truck on the market.”