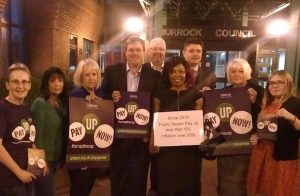 Time for Theresa May to cough up on public sector pay

Over the last 7 years, pay for many public sector workers has been frozen or capped at 1%.

This means that public sector pay has fallen badly behind the increasing cost of living, which is up over 20% in the same period.

Submitting the motion, councillor Oliver Gerrish called on the Government to fully fund both council services and public sector pay.

Speaking at the meeting, he said “In my view the public sector should set an example on fair pay and not accelerate a race to the bottom. When we erode the pay of public sector employees, private industry takes note.

“We don’t want the gig economy, the insecurity of modern work, the zero hours contracts that are beginning to be the norm for many workers.”

He added “We must take a lead on strengthening and not weakening the position of those who work hard to provide for their families.

“While many could see the sense in pay restraint immediately after the financial crisis, to have the cap linger for nearly a decade is to have gone too far”

The motion was passed by a majority of the council.