Arena Essex: Firecracker goes off with a bang 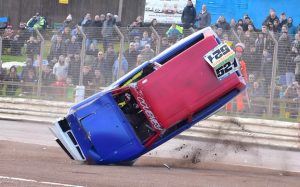 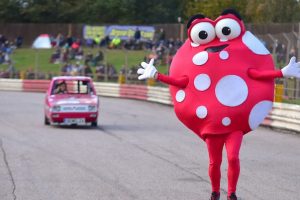 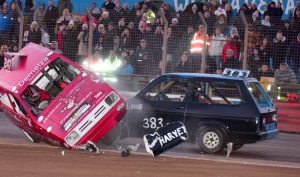 The 26th annual Firecracker Banger Final, with a generous prize fund put up by sponsor – Eyecomply – was won by Jason Jackson at Arena Essex at the weekend.

IT was certainly a case of quality over quantity this year, with a disappointing entry mirroring other similar events across the country. But amongst the cars there was a Oldsmobile Custom Cruiser from Gary Lee, which justifiably won the most unusual car award as well as a massive Lincoln Town Car from Micky Turner – the latter winning the smart car trophy.

Turner obviously had hopes of a repeat of his 2016 showing, where his Limo ended the day in a banana shape, as in heat one he steamed into the limo of Lee Macey and then parked his car across the track on the pit bend, almost inviting someone to come through the side. Unfortunately there were no takers this year. The Cadillac Fleetwood Limo of Paul Korpiela didn’t last very long at all with the car being thundered into the pit gate, collecting one of the posts and getting written off with one hit! Jason Jackson raced to his first win of the day.

Another Limo hit trouble in the second heat with Will Guppy getting spun by Tommy Parker, Guppy then getting destroyed by a hit from Dean Jarvis. Andrew Jones made a couple of attempts at disposing of the Toyota Previa of Parker, running him along the fence a couple of times, but it took the similarly mounted Previa of Charlie Daniels to land the telling blow on Parker. Stephen Pankhurst was driving a stormer of a race, taking a big lunge at the Alfie Lee Previa. But Lee got his revenge later, with Jack Warwick also landing a blow on Pankhurst. Dave Bull took the win in his first meeting of the year!

The final saw Pankhurst a clear target for the TMT Team and he was swiftly spun on the pit bend and saw the huge Oldsmobile of Gary Lee bearing down on him and the Previa of Jamie Harding coming in from another angle. The sandwich that resulted brought the race to a stop with Pankhurst thankfully only sore and not injured.

Shaun Brokenshaw was the focus for the regulars from the restart with Shaun showing great skills avoiding a number of attacks and even striking back with a couple of shots on Mark Marchant. Eventually Brokenshaw was clipped round by the Taxi of Matt Butcher and hit by the Yank of Bill Crittenden. A final shove from Ricky Hutton finished his race whilst Butcher and Crittenden switched their attentions to Jack Deacon. Deacon striking back whilst Jason Jackson took the chequered flag and promptly buried his car into that of Chris Trickett. David Bull and Charlie Daniels were the placemen behind Jackson.

The Destruction Derby saw an early stoppage for Lee Mott who was hit on successive laps by the rock hard Lee Oldsmobile. He climbed out with a wave to the crowd. At the restart Ricky Deans bravely hooked out Leon Sudbury with his aged Ford Granada which had already done several meetings and had been resurrected for the occasion. Sudbury fought back but then allowed Matt Butcher and Jason Jackson to land the final blows which left Deans car as the wreck of the meeting. The Previa of Charlie Daniels looked to hold all the cards in the final stages of the DD, World Champion, Adam Hitchcock attacked him but barely dented the people carrier and then blew his engine on the pit bend, coming to an oily stop. This just left Andrew Jones, who hit Daniels with a massive couple of hits after which Daniels surprisingly succumbed to the older Jaguar.

The Reliant Robins are also a big part of Firecracker day and they certainly did not disappoint with three great races and a ballistic Destruction Derby!

The best looking Robin was that of Jack Wright who was raising funds for Demelza Hospice Care for Children. Jack had never raced anything before and was understandably a little daunted but after a full day of running around dressed as the Demelza mascot ‘Dotty’ – his brief race appearances, which both ended with his car upside down – pretty much the norm for Reliant Robin races – was probably a welcome relief!

The race wins in the Reliant Robins were shared between Karl Douglas, Steve Willis and Daniel Douglas whilst the Destruction Derby came down to a fight between Douglas and Shane Harvey. Douglas outlasted Harvey but the latter received a Best wrecker award as compensation.

The 2.0L Stock Car British Championship was a dramatic race with Billy King seemingly in the clear until he was slowed by a backmarker and Nathan Roberts blasted by. It looked like Roberts had it in the bag but with two to go King was back on his bumper and then as they crossed the line to start the last lap Roberts blew his engine allowing King to take another title. This meeting also concluded the Track Championship with Phil Wise taking the title ahead of Nathan Roberts and Steve Davies.