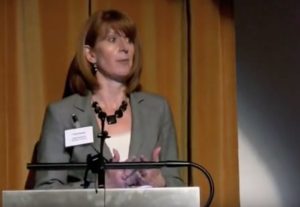 A FORMER boss of Thurrock Council is set to become chief of one of the largest councils in the country.

Ms Ridgwell is about to become the chief executive of Lancashire County Council.

Angie Ridgwell was chief of Thurrock Council between 2008 and 2009.

But those were very turbulent, unstable times when the able Ms Ridgwell had to oversee the Tory-run council, described by the Audit Commission as one possessing a “fundamental schism between officers and councillors”.

According to local press, there are a number of challenges facing Lancashire County Council just now.

One paper quoted: ” millions still to find in economies, deafening calls for the Government to intervene in the running of one of England’s biggest shire authorities, and the small matter of the council leader currently on police bail”.

Ms Ridgwell is currently director general of corporate services at the Government’s Department for Business, Energy and Industrial Strategy.

And among an impressive list of previous roles is chief executive officer of a unitary authority in Essex.

The outgoing chief executive of Lancashire County Council, Jo Turton, is being made redundant and others are leaving too in a controversial restructure of the authority’s senior management team.

For more details of the challenges go to