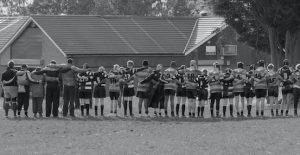 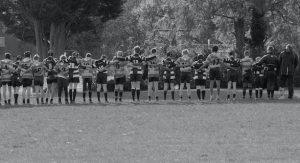 UPMINSTER started well, keeping possession for most of the opening 10 minutes. Thurrock won the ball a few times and made some decent runs, but Upminster’s defence stood firm and kept their opponents at bay. After 15 minutes, Upminster’s discipline and patience was rewarded with a try – Bradley Brooker passed out of a ruck to Josh Outen, Josh returned the ball a few yard later and Brad ran through to score Upminster’s first try of the day. Alex Amey’s conversion attempt was stopped short by the wind.

Eight minutes later, Thurrock lost possession after a lineout, Upminster won the scrap for the loose ball and new player Matt Fory collected and ran over to score. Alfie Rawe successfully converted, this time the wind being favourable.

Half time came with Upminster 12-0 to the good. After a rousing half time team chat led by today’s captain – George Watts – both teams joined together and stood shoulder to shoulder, observing the 2 minutes silence impeccably. The camaraderie was then put on ice for the next 25 minutes, with the Upminster starting the second half with the downhill advantage.

Two minutes in, Upminster retained the ball through a series of phases and all the way to their opponents corner – whereupon Victor Adeoye spotted an opportunity to run through Thurrock’s wall and ground the ball for a try. The wind conspired against the Upminster again, with Alfie Rawe’s conversion attempt being blown off course.

The next 10 minutes saw some good team play from both sides – neat passing, great defence and some decent runs in each direction. Upminster tried to break away several times, but whether a powerful run through the centre, or with pace down the wings, Thurrock made some tremendous tackles and stopped Upminster in our tracks. Not sure what the Thurrock players had for breakfast, but it paid off and drew applause from both sets of supporters for their resolute defending.

Eventually though, Upminster discipline and fitness paid off, the forwards winning rucks and then the backs passing the ball along the line at pace, using the full width of the pitch before Alfie Rawe went through to score. Alfie’s conversion attempt again defeated by the wind, Upminster went in to the last period of the game 22-0 up.

With the game almost over, a good team effort by Upminster saw the ball change hands between 4 players, with Victor Adeoye receiving the final pass before running the ball in for our last try. Alfie Rawe finished off by nailing the conversion, taking the score to 29-0.

A good all round team performance from Upminster – some great ball movement, solid defending, decent lines, dominance in the scrum and pleasing game management. Well done lads, a pleasure to watch.

Many thanks to Thurrock RFC players for what was a great game to watch, and to all the parents players and staff of both teams for a great atmosphere. Best wishes for a speedy recovery to the Thurrock player who took a knock to the ankle just before the final whistle.