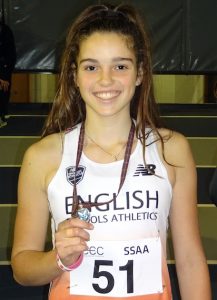 As an individual Ruby came 5th with a pentathalon of 3271 points.

The Essex ’10’ Miles Road Championships were held on a wind swept course at Stebbing near Dunmow on Sunday.  Mick Bumstead added yet another county medal to his vast collection by finishing 3rd in the MV60 section. Ever consistent, Mick had a race long battle with his Witham rival, who was on his home territory but ultimately just missed out on the silver.

Sue Beck had her best run in club colours finishing 20th in the women’s county championship.  Bernie Johnson MV60 was the club’s only other finisher and ran comfortably for a mid field positon in the 500 strong field.