Day of celebration for ambulance service

A day of celebration recognised almost 200 staff and volunteers from the region’s ambulance service this week (Wednesday, 15th November).

The East of England Ambulance Service NHS Trust (EEAST) held its Celebration of Learning to recognise the professional development and achievements of staff across the Trust, followed by the Celebration of Special Contribution, which recognised long service and those who have delivered excellence across a number of categories.

Held at Anglia Ruskin University’s Faculty of Medical Science, in Chelmsford, the ceremonies welcomed more than 400 staff, volunteers, families and friends and distinguished guests and partners.

Chief Executive Robert Morton said: “None of the progress we have made in the past or will make in the future is possible without the compassion, commitment and contribution of all of our people, whether they be directors, managers, staff or volunteers supporting their communities. We also know that what they do is simply not possible without the support they receive from their families and loved ones. These people tirelessly support and encourage their loved ones and our colleagues which means they can do what they do best, support the community.”

Certificates were presented during the Celebration of Learning to those who qualified as ambulance care assistants, intermediate ambulance practitioners, emergency medical technicians and paramedics. The afternoon event also saw those who had undertaken leadership qualifications presented with their awards.

The Celebration of Special Contribution heard cheers across the auditorium as staff were presented with medals for 20, 25, and 35 years’ long service and the Queen’s Medal for long service and good conduct – a medal especially for ambulance staff presented on behalf of Her Majesty the Queen by the Lord Lieutenant of Essex, Jennifer Tolhurst.

Other awards recognised the long service of volunteers in the contribution they have made to their communities on behalf of the ambulance service, and outstanding contribution awards of CEO commendations and special contribution awards for those going above and beyond the call of duty either through their work, or patient care.

The Lynne Storrie Award for a student in training who has proved themselves to be exceptional was presented to Watford-based student paramedic Stephen Myhre. The award is in memory of ambulance technician Lynne Storrie who died in a road traffic collision whilst driving home from the Trust’s Bedford training centre in February 2001.

Other Awards from the night and Chief Commendations are listed below:

Phil Smith
Laura Wallace
Both heroically dragged a man to safety moments before his car exploded.

Richard Smith
Managed not only an abusive caller at the scene of a traumatic job but then a very challenging incident, whereby his quick-actions resulted in the life of a suicidal woman being saved.

Corey Scourfield
Corey was on a red call in when he acted rapidly and instinctively when he drove past a man climbing over a bridge barrier, threatening to end his life. By the time he reached the man he had both legs over the railings and was about to jump. Without thought for his own safety, Corey grabbed the back of the man’s clothing and managed to drag him back over the railings to safety.

David King
Jane Salter
Both selflessly and heroically pulled a small child from the wreckage of a car after a collision, despite the vehicle being on fire. They gave exemplary car at the roadside to all those who were injured and professionally and calmly managed a traumatic incident.

Graham Welch
Sam Edlin
James Ashdown
Joanne Sheath
Michelle Gregory
This team used their quick-thinking and bravery to save a patient who had fallen down a manhole and severely injured his arm. Their teamwork, fearless approach to a challenging situation and speed of delivering top patient care meant the injured man was flown to hospital and on an operating table within an hour, giving him the best chance of recovery. 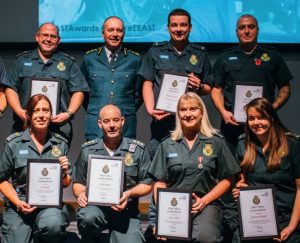 Special Contribution Awards
Lynne Storrie Award
Stephen Myhre
A student paramedic who the training team said without hesitation should win this award.
They said he has been exemplary throughout his two periods of education with us and supportive of staff and students alike, despite a great personal family tragedy during a course.

In the early hours of Sunday 11th August 2016, they came across a major road crash on the A120 involving two vehicles.
A driver, twice the legal alcohol limit, had been driving on the wrong side of the road and crashed head on with a car being driven by a pensioner with his wife as a passenger.
The scene of the accident was horrific and, still with a patient on board, our crew immediately put their training to good use.
Providing reassurance to all injured parties and performing CPR on a pensioner while he was still seated in the car, and despite all this remaining calm until further help arrived. Not only do this quick-thinking duo go above and beyond in the heat of danger but also in the depth of their hearts, recently carrying out an urgent journey to enable a mother from Colchester Hospital to be with her gravely ill baby in Luton, liaising with staff at Colchester General Hospital during their night shift and extending their 12-hour shift to ensure mother and baby were reunited.

Trust Award for Teamwork
Bryan Parker
Bryan has been hailed as a committed teamplayer, dedicated to the mentoring, supporting and guidance of students in recent years.
In the words of his nomination, Bryan is “phenomenal” when it comes to developing and evolving the skill set and knowledge of the team and is an invaluable member of staff.

Trust Award for Respect
Ian Taylor (St Neots)
Ian is a highly respected paramedic in and around St Neots, committed to mentoring many student paramedics. He is respected by students for his time and hard work to ensure the Trust has the very best new paramedics.

Trust Award for Honesty
Ant Brett (Patient Safety Team)
Undertaking a Serious Incident investigation into the death of a patient with sepsis, he developed a strong relationship with the patient’s mother. Over a period of almost a year he became investigator, advocate, and support for the mother, ensuring openness and honesty throughout the investigation process. This culminated in the provision of support to the mother to help create a discovery interview video and attendance at the September Board, for her to talk about the incident with the Board.

Excellence in Clinical Practice
Cheryl Dempsey (King’s Lynn)
Cheryl’s clinical knowledge is “second to none” with her co-workers stating a number of incidents where Cheryl has excelled. A nomination for Cheryl sited one particular incident – a traumatic cardiac arrest where the individual had been stabbed twice in the chest, in the throat and also the throat was cut open. Cheryl led this incident with true professionalism, calmly and as effectively as possible, including performing chest drains without a second thought in a volatile, upsetting and time-critical situation.

Excellence in Professional Development
Craig Borrett (Bedford Emergency Operations Centre)
Craig has strived hard to enhance his professional development in the past year, completing a course in Education and Training, learning the role and acting into the role of Duty EOC Officer (DEO).

Excellence in Leadership
Sandra Treacher (ECAT Lead)
Sandra received more than one nomination for her ‘door is always open’ policy, with staff calling her trustworthy, kind, caring and compassionate. Her leadership of the ECAT team through its rapid growth, development and recruitment over the last 2 years has bred an honest culture and safe a comfortable working environment, her staff have said.

Excellence in Community Partnership
Wendy Risdale-Barrs (CCM)
Wendy was nominated not only for her commitment to the RAF co-responding programme but also for her successful work with the regional fire and rescue services to introduce co-responding.

The Keith Marshall Award for Distinguished Service
Dennis Williams (CFR)
Chris Flack (CFR)
Previously known as the distinguished service award, this accolade has been renamed in memory of Keith Marshall a very special, outstanding CFR and volunteer who died almost one year ago.
This year two Community First Responders (CFRs) came neck and neck, both being recognised as “truly inspirational”, “dedicated”, “passionate role models”. They have both been branded great assets to the CFR network, always being available and contributing hugely to their communities.

Russell Brand calls on Thurrock Council to save the Thameside Theatre