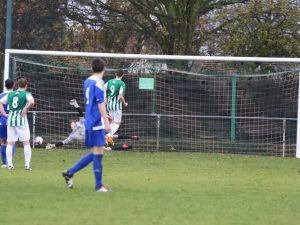 Liam Thomas was the unlikely hero at Oakside on Friday evening as the hosts’ centre half netted a hat-trick as the Motormen came from behind to defeat West Essex. The visitor opened the scoring in the fifth minute through Joe Lefley and managed to hold Redbridge at bay until the 57th minute when an Eljay Worrell free kick was diverted home by Thomas. And just three minutes later Thomas followed up to score after Moses had seen a point blank effort saved by Russell. Redbridge sealed the points in stoppage time when Jacob Dingli was brought down by keeper Russell which saw him sent off and Thomas stepping up to convert and send the hosts wild at the knowledge of his treble and also picking up another three points which took them five points clear ahead of Saturday’s matches.

Forest ended a run of eight straight defeats to record victory at Cricklefield against an out of form Barkingside that pulls themselves out of the bottom four by jumping off the bottom and up three places to eighteenth. Side on the other hand continue to slide and are now in thirteenth place. Nikko Stokes opened the Forest account in the 80th minute and then Mo Sagaf converted a penalty in the 88th minute. Barkingside were able to pull one back from the penalty spot themselves when Michael Ogboin converted in the 90th minute but Forest held on to record a much needed win.

Luke Hornsley struck in the first half to give the Bees all three points in a game where the visitors ended with ten men for the second away game in a row. The win means Redbridge are now just two points clear at the top now ahead of the second placed Bees, whilst Ilford remain in ninth spot.

Enfield survived a late Ramblers comeback to take all three points at Leslie Field against Burnham Ramblers. A Jayden Hocking-Rising double inside the first half hour had the visitors in control and they were cruising when James O’Brien added a third in the 67th minute. However the hosts netted twice in the final quarter via Alfie Hinton and Fraser Inns to set up a tense finale- but the visitors did take the win, moving them up to thirteenth, whilst the hosts slip to second bottom.

Hosts FC Romania twice came from behind to eventually see of Clapton at Theobalds Lane. The visitors took the lead through Greg Akepele, only for the hosts to level it up through Florin Pop, however Spencer restored the Tons advantage before the hosts fought back again and equalised via George Taban and then Cosmin Sandu netted a winner meaning FC Romania are up to fourth, whilst the visitors slip to sixth after a second successive defeat.

A Richmond hat-trick helped Rovers put Hullbridge to the sword at Burroughs Park, hitting seven past the Lower Road side. From the moment Russell put the hosts ahead inside a minute you felt the visitors were in for a long day and when Johnson and Richmond added further goals inside 25 minutes, a mauling looked on the cards here. And four minutes into the second half a second Richmond penalty made it four and although Miller pulled one back for Hullbridge with around twenty minutes to go, further goals including a hat-trick from Richmond and a long range effort from Pethers sealed a crushing win and sees Rovers up to fifth whilst the visitors sink to the foot of the table.

Ryley Scott struck three minutes from time to hand Woodford a second straight win in the league and hand Wick another defeat, leaving themselves in eleventh  whilst the hosts remain in the bottom four.

Takeley remain third after thrashing The Robins at Crofters. An own goal had the visitors ahead before Carl Mullings doubled their advantage. Jason Todd made it three before Mitchell Das capped a fine performance with a fourth. Defeat leaves Sawbo down in sixteenth.

Manor remain in tenth and just three points behind seventh placed Hamlets after they came from behind to take victory at Southchurch Park. After Bayley Newell had put the hosts ahead early on, Wale Odedoyin and James Ross turned the match around as the visitors led at the break. However Lee Delf levelled after his deflected effort found the net before Delf again thundered home a free header to give the hosts all three points.

Lodge continued their revival under boss Marc Farrell with a last minute winner against Stansted at Kitchener Road. Lodge took the lead, only to see the visitors peg them back on twenty minutes. The visitors then went ahead but were then pegged back before a late winner gave the hosts all three points, leaving them in 17th and only two points off Stansted in 12th.