Rugby: Thames fly away from Pegasus in the rain 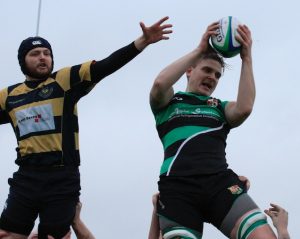 A LATE arranged fixture after both clubs lost their opponents saw local rival clubs Thames and Pegasus play friendly match at Garron Lane. The rain came in just before kick-off making playing conditions slippery and adding something extra to an anticipated competitive game. Both sides were fielding changed line ups, Thames were giving debuts to Jody Whittaker and Billy Gibbs with a welcome return for his first game of the season to Richie Gilbey all in the front row.

Thames managed to break the early deadlock from a penalty move straight off the training field, with winger Kyle Munro cutting in at an angle then stepping between the Pegasus defence. Max Clarke is enjoying a purple patch this season and it wasn’t long before he added his name to the score board when he sprinted from the Thames 22 line all the way to the Pegasus try line. Rhys Dell was accurate with the boot adding the points and a twelve nil lead. The forwards were playing their part for Thames in a very competitive contest with their visitors, so when Edgar Juska dived over the try line it came from a very good set piece move that involved all the forwards. Dell made the score 19 nil.

Despite the score line Thames were far from having it their own way, a mixture of good defence and last minute handling errors was only keeping Pegasus at bay. However Pegasus had the momentum and their forwards were determined to get their side on the score board. From a scrum the pressure was just too much for the new Thames front row and after several reset scrums the match official awarded a penalty try with the extra two points given as well. Pegasus had got the try they needed and they now had a renewed vigour, attacking fast through open play this time they crossed the Thames try line just four minutes after their first score and another conversion brought them back within one score. Pegasus were unstoppable and a third unanswered try came just before half time from another very good move with the conversion added, giving Pegasus the lead at half time 19 -21.

The first half lived up to what everyone would expect from a local derby and the second half was set for another 40 minutes a great rugby. Thames were first to score in the 2nd half with Rhys Dell breaking through from a quick penalty and touched down under the posts with the extra two points for the conversion. Chris Ola having taken over from Ryan Looker on the wing was next to get on the score sheet. Ola’s powerful run saw him dispense with the defence and ran in over the try line; Dell again added the extra points. Thames like Pegasus in the first half were now flying and just like Pegasus in the first half were awarded a penalty try and conversion for persistent infringement by the Pegs defence.

Thames had the very last say of the game but it came from lady luck being on their side and had Munro and Clarke once again linking up. With only seconds on the clock Pegasus were powering Thames back in a scrum, Pegasus were instructed by the match official to use the ball and Thames pounced putting pressure on their opposition. As the ball spilled out Munro was first to come away from the Thames 5 metre line and sprinted all the way to the Pegasus 22 metre line where team mate Clarke took over and touched down. Dell added the extra two points and the final whistle blew at 45 -21.

Despite the score line the game had been a great spectacle of gutsy rugby, with incidents, exciting open play and an epic forward battle. Thames awarded their man of the match to scrum half Matthew Hook, his control of the game gave Thames that little extra, mixing it up between forwards and backs and snipping around the side himself.