PUPILS from Tilbury Pioneer Academy’s choir recently joined 2,000 children and young people from schools across the country, to sing their favourite songs and raise money at Barnardo’s Young Supporters’ Concert at the Royal Albert Hall, London.

The concert, which took place on Wednesday 1 November 2017, saw pupils perform a variety of songs by bands including Coldplay and from well-loved children’s films and television programmes such as Oliver! and The Flintstones.

It is hoped the event will raise more than £50,000 for Barnardo’s. All the money raised will go towards helping the most disadvantaged children, young people and parents and carers in the UK.

Barnardo’s Chief Executive, Javed Khan, said “I would like to say a great big well done to everyone who took part in this fantastic evening of music and dance. It takes a lot of courage to stand up and sing or dance in front of so many people but the hard work and rehearsals really paid off with a brilliant show. Thank you so much for helping us to raise so much money towards our vital work supporting hundreds of thousands of vulnerable children each year.” 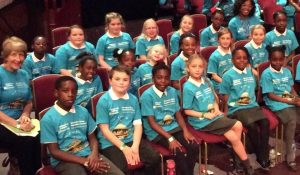 Head of School, Mr Dan George, said “I am so very proud of our pupils who represented Tilbury Pioneer Academy and sang to their hearts content. I would also like to thank our parents for their continued support. The pupils have been rehearsing 16 songs for the last two months and the concert ended with a rousing rendition of ‘Land of Hope and Glory’. Their behaviour was impeccable and we look forward to being involved again next year!”