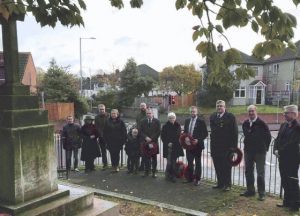 PRESSURE from UKIP and the local community has forced the Conservative Council leader to clean up his own back yard claim Thurrock UKIP.

UKIP Thurrock Chairman, Allen Mayes enquired to the council as to why it had not been cleaned and whether members of the community would be able to clean it themselves.

Allen Mayes said: “Residents were outraged by the state the War Memorial was left in and that the Council had not even cleaned it for the Remembrance Sunday Service. If the Council wouldn’t clean it, the residents will!

“The community are now happy that the Memorial has had a ‘light clean’, however it needs regular upkeep. We hope the Council will now keep on top of it.

“It is disappointing that it required complaints from members of the public for the Council Leader to make sure his local War Memorial was tidy. Hopefully he will now start looking after his local area he was elected to represent.”

One Response to "Thurrock UKIP disgusted at state of war memorials"