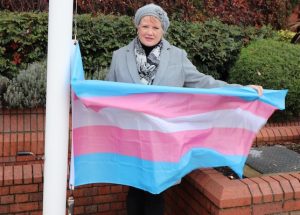 The cabinet member responsible for equalities and diversity, Cllr Deb Huelin, joined residents and members of the Lesbian, Gay, Bisexual and Transgender (LGBT+) Forum, to raise the Transgender Pride Flag outside the Civic Offices, Grays.

Residents and staff were also invited to a networking event in the afternoon which offered transgender support and advice from the council’s LGBT+ Forum.

The international day, which occurs annually on 20 November, brings attention to the continued violence endured by the transgender community and honour those who have been victims of transphobia.

Cllr Huelin, raised the flag at the event and spoke after: “Thurrock has such a varied community and it is important we recognise everyone who has been lost due to or affected by hate crimes, including those who are transgender.

“Whilst we must honour those who have been affected by – or lost their life due to – hate-crime and discrimination, we must also stand up against these crimes and do our best to prevent them.

“It is crucial that we stand shoulder to shoulder against this form of abuse to help not only build a better Thurrock for tomorrow, but create an open and inclusive community for generations to come.

“I was very honoured to be part of this year’s remembrance event – thank you to everyone who attended and showed their support.”

For more information about Thurrock events, go to thurrock.gov.uk/events

One Response to "Thurrock Council raise flag high on Transgender Day of Remembrance."